Two Cricket Australia staffers are going above and beyond the call of duty, submitting themselves to two weeks of hotel quarantine to ensure the country's biggest stars are ready to take on the might of Virat Kohli's men on Friday.

Whereas Steve Smith, David Warner and the rest of Australia's IPL stars were mandated to self-isolate upon returning to the country, CA physio Kate Beerworth and physical performance manager Andrew Weller were in Australia and voluntarily entered hotel quarantine alongside the IPL players to smooth their transition. 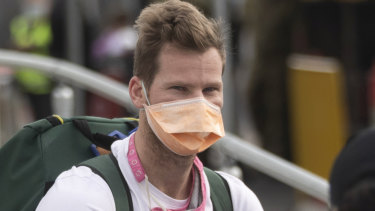 Steve Smith is one of several Australian players in hotel quarantine.Credit:Brook Mitchell

The quarantine period does not finish until Thursday afternoon, which means Langer's team will have less than 24 hours together before taking the field at the SCG on Friday for the first men's international of the summer.

In lieu of real face-to-face time, players have resorted to virtual meetings on Zoom to discuss team tactics and plans. These meetings have provided a welcomed distraction for players to while away the hours before or after training – the only time they can leave their rooms.

Marcus Stoinis and Adam Zampa have spent their down time meditating and conducting breathing exercises, while Smith revealed he had been shadow batting.

Known for his insatiable work ethic, Smith is one who has benefited from training in quarantine, where has not had to share nets with as many teammates.

"Because we’ve had a sort of smaller group than what we’d normally have for a training session, it’s actually been good for batters like myself to be able to get the time that I can in the nets," Smith said.

"To not have to worry about helping out other people in a way if that makes sense. I’ve had some good bats in the last couple of days."