A merciless Australia are striving for a 5-0 clean sweep of England as the foundation for claiming the World Test Championship next year.

Australia heads into the fourth Test at the SCG, beginning on Wednesday, leading 3-0 after demolishing England in Brisbane, Adelaide and Melbourne.

Nathan Lyon claimed there was no such thing as a “dead rubber” despite Australia retaining the Ashes with an innings’ victory in the Melbourne Boxing Day Test.

“I’ve never considered any match a dead rubber when you’re wearing the baggy green. You’re going to go out and represent Australia in a Test match,” Lyon said before training at the SCG on Sunday.

“Firstly, because it’s the Test championship. But also we want to go five-nil up.”

Each Test victory earns points towards the WTC across a two-year cycle, with the top two teams playing in the final, scheduled for Lord’s in mid-2023. 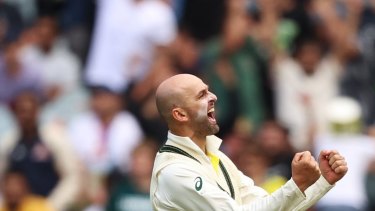 We’re not done: Nathan Lyon wants a 5-0 series win in the Ashes.Credit:Getty

Australia would have played in the final last year had it beaten India but lost 2-1 after winning the first Test of the four-match series.

“Obviously, Ashes for me is the pinnacle, but I’d love to be part of a Test championship final, whether that’s at Lord’s or wherever it may be in the world, to really state our case for the number one team in the world, so there’s a lot of work to do to get there.”

Should Australia claim all five Tests it will be their second 5-0 clean sweep in five home series. England have now gone 13 Tests in Australia without a victory, losing 12 and drawing one.

There is continuing speculation around whether Australia will hand leg-spinner Mitch Swepson his Test debut to partner Lyon but the weather forecast and the changed nature of the SCG pitch conspire against this.

“Every time you put stumps in this ground it tends to bring the rain, which is unfortunate, but that’s out of our control,” said Lyon, referring to the SCG’s recent history of interrupted play.

Showers are forecast throughout this Test and while Lyon is a great fan of Swepson’s bowling, he is indifferent to the assistance spinners now get from the SCG pitch.

“It’s not the most spin-friendly,” Lyon said. “A lot of people are stuck in the real old days where there were big footmarks there. Trust me, I would have loved to bowl on them. 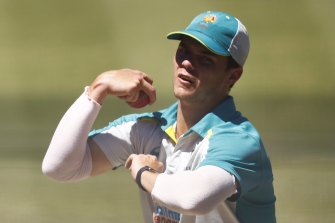 Chances diminishing: Mitchell Swepson’s Test debut may have to wait.Credit:Getty

“I’ve had a mixture of wickets here in Sydney where it has spun, a couple haven’t spun, [some] have been a lot of hard work, some have been a bit lively with the seam.

“It’s been a mixture of bags of different wickets … but it’s probably not the most spin-friendly place I have ever been to.”

His figures at the ground support this. In 10 SCG Tests Lyon has claimed 38 wickets at a cost of 41 apiece, well above his overall career average of 32 in Australia.

If Swepson was to play, one of Australia’s fast bowlers would miss out.

This would mean either Scott Boland, who claimed 6-7 on debut at the MCG last week, or Josh Hazlewood, who is recovering from a side strain.

Australia’s pace bowlers did not train on Sunday but will have a full session on Monday, where Hazlewood will have a better idea of his fitness.