Home » Сricket » Wyatt fires as Renegades hit back against the Strikers

The Melbourne Renegades have exacted swift retribution on the Adelaide Strikers to secure a 1-1 WBBL weekend split with a five-wicket win.

After losing to the Strikers by six wickets on Saturday, the Renegades squared the ledger at Karen Rolton Oval yesterday when they reeled in the hosts’ score of 5-152 with an over to spare. 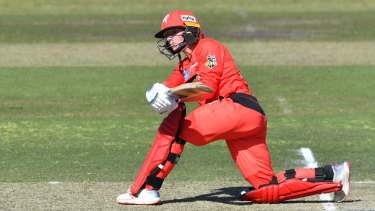 On the offensive: Danielle Wyatt takes the long handle against the Strikers’ attack during their WBBL match at Rolton Oval in Adelaide on Sunday.Credit:AAP

England international Danni Wyatt crunched 10 boundaries in a sublime 61 for the Renegades to earn player-of-the-match honours before captain Jess Duffin (26) produced a flurry of timely boundaries, just when the asking rate was beginning to rise.

The Strikers were looking good when the dangerous Sophie Molineux nicked the first ball of the Renegades’ innings, a wide loosener from Sophie Devine, through to keeper Tegan McPharlin.

But fellow opener Wyatt soon got going and dominated a memorable 84-run second-wicket partnership with Tammy Beaumont, who made 41 against her old team. 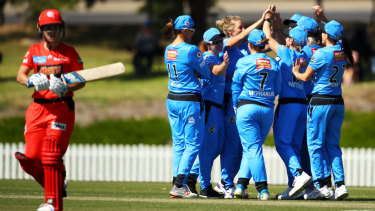 Devine (2-32) was the best of the Adelaide bowlers after earlier standing out with the bat.

The New Zealand star walloped four sixes in her 30-ball knock of 48 before falling to a fine Claire Koski outfield catch after she had dominated a 73-run opening stand with her Kiwi ‘Smash Sister’, captain Suzie Bates (24).

Maitlan Brown (2-20) and Molly Strano (2-28) provided a balanced mix of economy and breakthroughs to quell the Strikers, who were also solidly served by Bridget Patterson (38) and Tahlia McGrath (24) but had no one capable of matching the sustained brilliance of Wyatt.