Home » Athletics » From fashions on the field to a winner’s sash: Ware’s win at Stawell

Two years ago when the Stawell Gift was last run Edward Ware won the Fashions on the Field.

On Monday he finally had sprinting success on the field, winning the 120-metre race on grass in a time of 12.19 seconds from a mark of 9.75 metres. He then backed it up and won the 200-metre final an hour later. 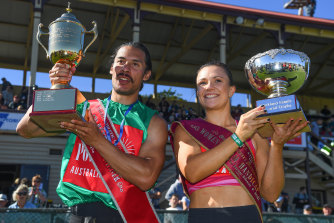 Edward Ware (left) and Hayley Orman hold their trophies after winning their races during the 139th running of the Stawell Gift at Central Park.Credit:AAP

It was his third time making the 120m gift final after running second by one thousandth of a second in 2011 and fourth in 2016.

“It’s something about every five years, it just seems to work that way,” said Ware who turns 33 next month and felt this was his last serious crack at winning the race. Sebastian Baird was second in 12.23 from 8m.

Hayley Orman, an affineur, supplements her sprint training tasting cheese – working off the calories of her favourite comté – and lifting 40-kilogram wheels of maturing cheese in humid mouldy rooms.

“In the last three years I’ve been a teacher who turned into a cheese affineur or cheese-ager. My cheeses are sold Australia wide,” she said.

“I work for a company called Cheese Culture, which is based in South Australia. I work in a big cold warehouse full-time ageing cheese, tasting cheese and dealing with the quality.”

“I took a bit of a (career) detour. I love food, it’s my second love to running and it just happened to fall out this way. So that’s what I do. I age cheese and I run fast.”

Her favourite cheese is a French comté, in case you were wondering.

“I spend my days lugging 40 kilo wheels of cheese… I work in a big humid room which is filled with all kinds of moulds so I sometimes feel like I have these weird moulds in my lungs which help too,” she said.

“I’ve always believed I’m destined to do something amazing. I didn’t know what it was or when it was.”

Ware said the COVID lockdown helped him as he used to like to go out on Friday and Saturday nights and lockdown imposed a discipline to his training.

“When you can’t go out you are kind of forced to go to bed early, get up and put on the spikes the next morning,” he said saying he and his wife Casandra – also a gift runner – adopted a strict morning training routine.

In the two-mile race Australian champion Stewart McSweyn, the backmarker running from scratch and giving other runners in the star-studded field up to 320m head start, ran well but could not haul in the field.

He finished fourth with training partner Tom Thorpe, who started off a mark of 200m, winning in 8:10.55 with Jhye Hadfield second, and Jack Rayner a former national 1500m winner finishing third.

“I think you always think you are a chance to win, especially when a few guys start coming back towards you you think ‘I am going to pick them up one by one and hopefully I can get to the final guy’,” said McSweyn who ran 8:20.36.

“With maybe two laps to go I looked up and saw I still had a pretty big gap so I thought ‘I am going to have to run that second last lap as my last lap to try and get on.

“Once I couldn’t get quite where they were it meant it was a pretty rough last 400.

“I am pretty happy with that time. It was pretty windy, especially with about 200 to go.

“I have qualified for Tokyo in the 5k and the 10k, so at the National (titles later this month) I will be hoping to qualify for the 1500 in Sydney.”