Home » Athletics » ‘It hurts’: Bol says he is a victim of ‘flawed system’

Australian Olympian Peter Bol believes he is the victim of a flawed and unfair anti-doping system, pleading his innocence and asking people not to rush to judge him.

Last week, Bol returned a positive result for erythropoietin, or EPO, and was provisionally suspended. He denies having taken the banned substance, saying the positive result came as a shock and has shaken his confidence in the testing system. 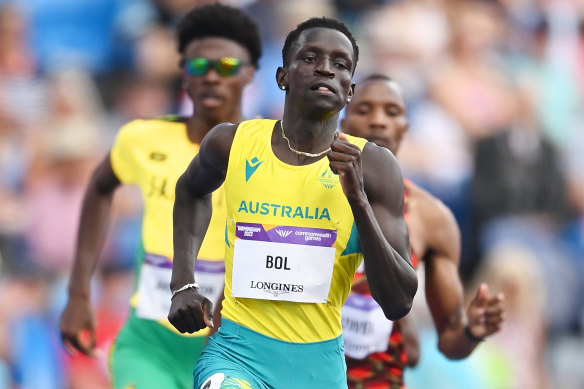 Peter Bol in action at the Commonwealth Games.Credit:Getty

“Of course I’m saying ‘how is this fair?’ And how is the B sample going to be fair? I’m innocent, so the process is flawed. And I feel this anti-doping system is flawed. I’ve heard before comments on the circuit that so-and-so was being screwed. And that’s a shock … because you assume the system is fair. And now I’m becoming a victim,” Bol told The Age and Sydney Morning Herald.

“I can’t control what people think of me, but it’s important to me and I hope they will give me a chance to prove my innocence,” he added.

Bol’s hope now is that he can be the next Bernard Legat. 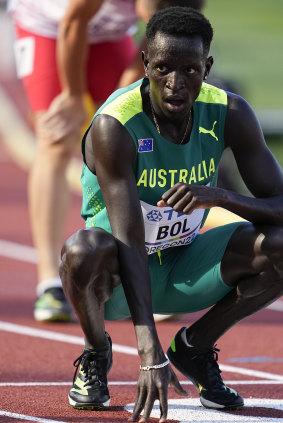 Bol takes a moment after his race at the world Championships in Oregon in 2022.Credit:AP

In 2003, the champion Kenyan middle-distance runner, Legat, returned a positive A sample like Bol did. Later, Legat’s B sample came back negative.

According to the Australian Academy of Sciences, EPO stimulates the production of red blood cells in bone marrow and regulates the concentration of red blood cells and haemoglobin in the blood. It is naturally produced by the kidneys, but a synthetic version can be injected as an illegal performance-enhancing agent because it improves endurance levels in athletes.

Bol can request to have his B sample tested to either verify or cast doubt on the A sample. Through his manager, James Templeton, and US lawyer Paul Greene he has asked not only to have his B sample tested using the same gel test that the A sample was subject to, but that a second type of test used by WADA – the IED test – also be done. The combination of the two tests would provide a more satisfactory double-checking of the initial A sample.

EPO is a hard substance to test for because unlike other synthetic drugs it also occurs naturally in the body and so it is hard to distinguish what is synthetic EPO and what is naturally produced.

To date, Bol and Greene have only been given a summary sheet of his results stating that Bol had tested positive. The test they did on the urine – the SARS-Page gel test – seeks to identify the synthetic from the natural EPO. It measures EPO levels across five bands. It found Bol had an elevated reading in just one of those bands.

How does WADA’s testing process work?

“Based on my experience that is a very close call for a positive test,” said Greene, who is head of Global Sports Advocates. “But we have not seen the lab results, we only have the summary sheet and we won’t get the full lab results until after the B sample results are back and that will be months.”

The B sample will not be opened until February 1, when it will be tested in Australia and some of the sample will be sent to a WADA lab in Cologne for separate testing.

It is rare, but there is a chance that the EPO level could be a false positive and only recording naturally produced high levels of EPO.

The problem for Bol is if the tests confirm elevated EPO to illegal levels or, worse, the presence of synthetic EPO, then it can only be there from being injected. There is no known accidental way it gets there.

Bol had his blood tested 10 times last year. His urine was taken for testing 16 times. He returned a positive test on October 11 last year from an out-of-competition urine test. Athletes can be tested any day of the year, not just “in competition”, meaning the days before during or immediately after races. This was a test done only five days after he had resumed training and months before racing in competition.

Some in athletics found the timing odd, reasoning that if, for argument’s sake, you were a cheat injecting with EPO why would you do it then, just five days into a new training block and miles out from competition?

“This will be decided by the scientists and the scientific evidence but, yes, normally when an athlete takes EPO it is before an event to improve performance,” Greene said. “It is not when they are lying on the beach at the end of their break like Peter. 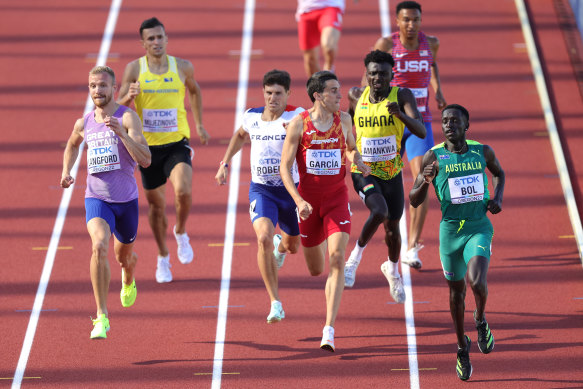 Peter Bol competes in the men’s 800m at the World Athletics Championships.Credit:Getty

When he was informed of his positive test, somewhat surprisingly it was by Sport Integrity Australia officers who had arrived at his house from Canberra to hand over a document informing him of the failed test. Often athletes and their sporting body are informed by email.

The integrity officers arrived at Bol’s house with the news and asked for his phone, laptop, iPad, or any devices he owned so they could examine his internet search history, his calls and his messaging history for any incriminating evidence of discussions, purchases, research about doping or contacts who could be suppliers.

Bol handed it over and will also volunteer bank details to verify no payments have been made to anyone for drugs.

After learning of the positive result, Bol’s coach Justin Rinaldi contacted Sport Integrity Australia and further volunteered his phone and laptop as well as Templeton’s and urged them to check their devices. Histories or wiped messages or calls can still be checked, and they wanted the authorities to be satisfied there had been no discussion, plan for doping, or purchase of drugs. 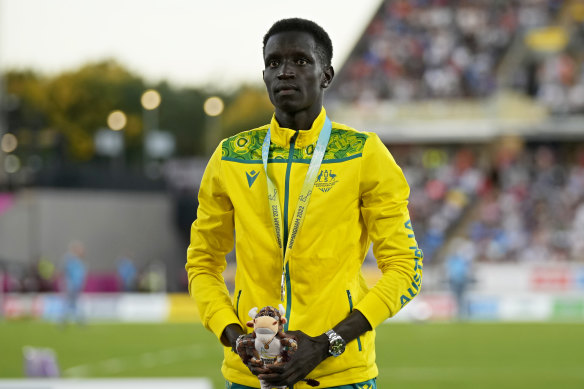 Bol on the podium after winning silver in the 800m at the Commonwealth Games.Credit:AP

Days after the news broke Bol remains bewildered and in a state of disbelief. He released a statement immediately after Athletics Australia released the news of the positive test.

He says he can figure no explanation as to how he could have returned a positive test because he had never injected anything. He can only assume scientific error at the moment.

“It was a massive shock. Surreal. As the days go by it sinks in a bit. It’s still a shock. But you have to deal with it and I’m doing what I can,” Bol told The Age and Sydney Morning Herald on Sunday.

“People around Australia will be disappointed and some might feel let down. That hurts me deeply. And it hurts that I can’t do much about it right now other than to say in the strongest terms that I never, ever did what they’re accusing me of.

“The support I’m getting from so many areas, from the athletics world in Australia but also from so many I know from overseas that means a lot to me. And so, so many people, sometimes quite random, have reached out to me or my coach or my manager. It means a lot at this tough time … it’s very nice, I really appreciate it. ”

What’s next for Bol’s B sample?

The popularity that came from the extraordinary breakthrough efforts on the world stage at the Tokyo Olympics where he finished a narrow fourth and then his silver at the Commonwealth Games last year elevated his status. Adidas, Longines and Voost vitamin company all took him on. He was the Western Australia nominee for Young Australian of the Year, and on Monday, was due to fly to Canberra for the announcement of the winner this week. He won’t be winning it now.

Those in Bol’s training program, who are in disbelief at the positive test, said that many things about the positive result did not compute for them. It did not correlate with the person they knew and trained with, with the breezy athlete who, if anything, lacked the “all it takes” mentality to be the best in sport.

He wasn’t getting drastically better results. In 2018, he ran a personal best 1:44.56 for the 800m in Stockholm. It took him four years to improve that time and when he did, it was by half a second.

Before he broke through at the Tokyo Olympics with his fourth placed finish – missing a medal by just 0.53s after running slower than he did in his heat – Bol had a small profile as an athlete and an equivalent salary. He was on a pittance.

The cost for Bol to defend this case will be ruinous; to pay for lawyers and medical experts to challenge it to the lengths necessary he is looking at more than $250,000. Not to challenge would equally ruinous; financially, reputationally, professionally and mentally.

“I started running late in life, so I’m not obsessed with it,” says Peter Bol, who has a degree in construction management and economics. “I don’t want to be so single-minded that I forget the rest of the world.”Credit:Kristoffer Paulsen

“The reality is if we win this hearing they will appeal and if they win we will appeal, so it is not going to be a short process. And WADA has unlimited resources for legal teams and experts whereas the athlete [does not],” Greene said.