Andrew Bogut appears set to make his NBA return to the Golden State Warriors next week against the Indiana Pacers.

There had been hopes the Australian centre might join the reigning champions during their four-game road trip that begins at the Houston Rockets on Wednesday and includes games against the Oklahoma City Thunder, the San Antonio Spurs and concludes on Tuesday in Minnesota against the Timberwolves. 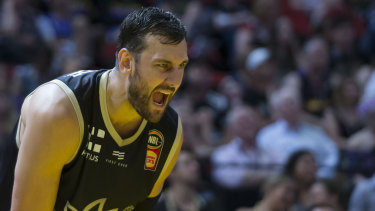 Andrew Bogut is expected to be back in action with the Golden State Warriors next week.Credit:AAP

But Bogut's agent David Bauman told the Bay Area News Group that the veteran Australian is targetting his return after the road trip.

Bogut will receive a jubilant welcome from Warriors fans if his first game is at the team's sold-out Oracle Arena on Thursday week against the Pacers.

The 34-year-old, beloved in the San Francisco Bay Area after he helped the Warriors win a title in 2015 before he was shipped to the Dallas Mavericks the following year, has had his NBA return held up by the process involved in obtaining a US work visa.

Bogut is expected to receive the visa from the US Consulate in Sydney by the end of the week before he flies to California.

The top pick in the 2005 NBA Draft, Bogut made the surprise move back to the Warriors after he recently claimed NBL MVP and defensive player of the year honours in his inaugural season with the Sydney Kings.

The Warriors, favourites to win their fourth title in five years, swooped in and signed him to a veteran's minimum contract on March 6 to bolster their front court for the impending play-off run.

The playoffs begin on April 13.