When Casper Ware was leading Melbourne United to back-to-back NBL finals, he spent the days leading up to Sydney Kings matches breaking down how he would beat Andrew Bogut.

Armed with that knowledge, two texts was all it took for Bogut to convince Ware they should join forces in pursuit of more NBL glory, having already tasted the ultimate success with Melbourne in the 2017/18 season. 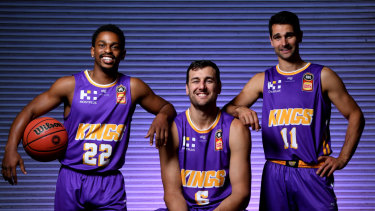 Casper Ware, Andrew Bogut and Kevin Lisch will all be key to Sydney’s hopes this season.Credit:AAP

"Yeah, there were a couple of texts," Ware explained.

"We just spoke about what we could do together and what the guys were trying to do here in Sydney.

"That meant a lot. That was big for me. He's one of the best players in the league so he didn't have to say much more."

Ware was also sick of going up against the reigning NBL MVP.

"He just makes life so much easier for everyone else on the floor," Ware said.

"I don't have to be the guy making the play every time.

"When we run the offence through him he's always looking to make a play, looking to find guys and put guys in good spots.

"On the defensive end he gets in your head because of his impact at the rim.

"Guys are hesitating and thinking about whether they should or shouldn't go to the rim just because he's there." 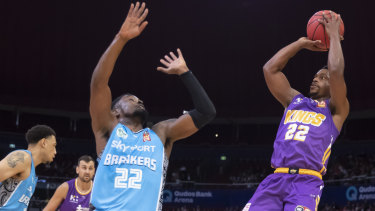 Bogut may be the reigning NBL MVP but it's his role as a pseudo-general manager which has the Kings perfectly placed to claim their first title since 2005.

Fresh Kings recruits Ware, Jae'Sean Tate and Didi Louzada have started the season in superb form as the Kings have raced to a NBL-leading 4-0 start.

Ware has led all Kings players in averaging just over 19 points per game but credited new coach Will Weaver as the catalyst behind the hot start.

With a little more experience, Ware can see Weaver returning to the NBA.

"He doesn't just focus on the best five guys," he said.

"He knows that every guy in the group has a different role to play.

"The more experience the better for him. He's already got that G-League and NBA experience and worked with the Boomers at the World Cup, too.

"It's just like being a player. The more experience you get, the better you get."

With Ware on board, the Kings are a genuine championship contender and the 29-year-old couldn't help but entertain the prospect of claiming his second NBL title in Sydney.

"If you don't think you're the best, you have a problem," he said.

"But we have a lot of work to do. We know that. We have a lot to work on before we can win a title.

"But we have already shown what we can do and the more we play together and the sooner we figure out how to improve, the better."