Point guard Casper Ware has called on Melbourne United to make their own energy when they attempt to take control of the NBL grand final series from the Perth Wildcats on Friday night.

While the series is tied 1-1, the Wildcats will be at home for game three on Friday night and host the deciding game five, if needed, so Melbourne have to win at least one of those to have any chance at the title. 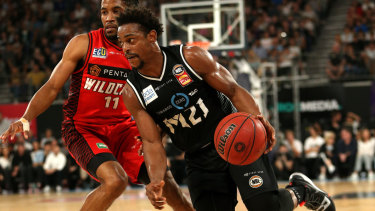 Casper Ware says Melbourne will need to create their own energy in front of a Perth crowd in game three.Credit:AAP

In two regular season games in Perth, Melbourne fell by tight margins, while in game one of the grand final series, they were ahead at half-time at RAC Arena but faltered in the third term as a ruthless Perth made a match-winning run.

Ware feels like his side let a win slip through their hands after that poor third term and he has urged his side not to let that happen again by withstanding the home side's runs and generating their own energy via hustle plays and defensive stands.

"We have got to make our own energy as we are away," Ware said.

"We have to be happy, be upbeat and take that over there.

"We had a lot of turnovers in game one, if we cut that down then we will be a lot closer and put ourselves in a better position to win."

The travel and added stress of a grand final series staged on Australia's east and west coasts is taking its toll but Ware and other Melbourne players said they still felt confident they could beat the Wildcats in Perth.

In both games one and two, the third quarter was pivotal as the winning side made a telling run and while the Wildcats will have a sellout home crowd cheering them on, Ware wants his side to make the third quarter its own.

"I want to see us repeat what we did here [at Melbourne Arena] in game two – come out aggressive and play hard," Ware said.

"We know how they like to live off that third quarter at home so just got to do everything, take care of the ball, rebound and when they look to make those energy plays that they love – we can’t let them get it."

In the past 10 years the home side has won 31 of 34 NBL grand final series games and the West Australian  reported that across this season the Wildcats have a +86 advantage in the second half of night home games.

Friday night's game is set for a 10.35pm AEDT tip-off, so the second half will likely finish after midnight.

Melbourne's players all have their own routines for dealing with time zones but think their own errors and Perth's great shooting were bigger factors in game one than tiredness.

In Ware's mind confidence and self belief is the key to a game three win.

"You have to have confidence in the group and we have that," Ware said.

"Going into game three that's going to be big."