LeBron James left in the second quarter with a high right ankle sprain that the Lakers said will sideline him indefinitely, and Los Angeles went on to fall 99-94 to the Atlanta Hawks on Saturday.

Two hours after the game, the Lakers announced that James is out indefinitely. The defending NBA champions already are without All-NBA big man Anthony Davis, who has missed 14 consecutive games with a right calf injury and likely won’t play again until April.

“Nothing angers and saddens me more than not being available to and for my teammates!” James tweeted later Saturday. “I’m hurt inside and out right now. The road back from recovery begins now. Back soon like I never left.” 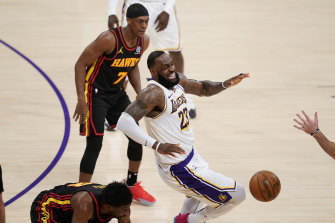 James was hurt when he rolled his ankle under Solomon Hill, who was called for a foul as he reached awkwardly for a steal. The 36-year-old superstar screamed and fell to the court clutching at his ankle, yet he got up and briefly stayed in the game.

After the injury, James hit a corner three-pointer that extended his NBA-record streak of games with at least 10 points to 1036, but he called a time-out and left the court shortly afterward. James knocked over a chair in frustration as he went to the locker room.

John Collins had 27 points and a season-high 16 rebounds, and Trae Young added 14 points and 11 assists for the Hawks. They opened an eight-game trip with their eighth straight victory under new coach Nate McMillan — but only after their defending champion opponents lost their 17-time All-Star to an injury that could shake the NBA’s balance of power if it turns out to be serious.

Tobias Harris scored 23 of his 29 points in the first half and fell just short of a triple-double to lead short-handed Philadelphia past Sacramento.

The Eastern Conference-leading 76ers played without starters Joel Embiid, Ben Simmons and Seth Curry. Embiid has missed four straight games with a bruised left knee and is expected to be re-evaluated late this week. Simmons experienced knee soreness at the morning shoot-around and was a surprise late scratch. Curry injured his left ankle Wednesday.

Giannis Antetokounmpo had 26 points and a season-high 15 assists, leading Milwaukee past San Antonio for their sixth straight victory.

Lonnie Walker scored a career-high 31 points for the Spurs.

Paul George had 21 points and 10 assists, Kawhi Leonard added 17 points and the Los Angeles Clippers emerged from two inconsistent weeks with a big victory over Charlotte.

Terance Mann scored 16 points and Lou Williams had 15 for the Clippers, who went 23 for 23 from the free throw line during just their third win in eight games. Los Angeles bounced back from blowout losses to New Orleans and Dallas in the previous six days with an overwhelming effort against the Hornets, who lost their third straight.

Jordan Poole led the Warriors with 26 points, connecting on 10 of 21 shots.

The Warriors, already short-handed without guard Stephen Curry and frontline players James Wiseman and Eric Pascall, were dealt another setback with the absence of Kevon Looney. Looney, who played well against Valanciunas on Friday, was the latest to fall under the league’s health and safety protocol.