The soap opera surrounding Ben Simmons continues to dominate the Australian narrative in the NBA when the season begins on Wednesday (AEDT) as the point guard and Philadelphia attempt to find some middle ground following his stunning suspension from the 76ers season-opener.

But the emergence of Oklahoma City rookie Josh Giddey, the move of Patty Mills to the Brooklyn and Jock Landale’s addition to the roster in San Antonio will ensure Simmons isn’t the only Australian in the headlines once the season tips off in Milwaukee as the champion Bucks host the Nets.

Simmons had been back at 76ers training this week but a return to the court has rarely looked further away following the news he will miss Thursday’s clash with New Orleans after the three-time All-Star “wasn’t engaged” in a session.

The 25-year-old wants to be traded but Philly haven’t found a suitor, while it’s also been reported that the Sixers have tried in vain to convince him to stay and mend the relationships that fractured after their play-off exit last year.

Either way, says Australian basketball great Andrew Gaze, it will make for compelling viewing as the drama that dominated off-season headlines continues to play out now the NBA has surged back to life.

“It certainly will dominate the headlines for the short term and a lot depends on how they can reconcile their situation,” Gaze said. “None of us really know what is going on and there are so many complexities involved. 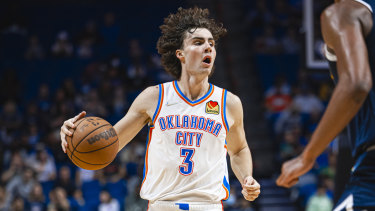 “We all just speculate and make those judgments. But it is serious for both Ben and the team and if they can’t find a way to reconcile, it’s hard to see any winners.”

Gaze believes it’s in the best interests of both the Sixers and Simmons to get him back on the team and on the floor. The better he plays, the more likely he will find a new home and the better chance Philadelphia can get value in a trade for their superstar.

“To get the value they need for him, they want him to get back and playing well if they are to have any prospect of getting the value they think he’s worth,” Gaze said. “But if there is still bad blood and no good will, it’s going to drag on.

“The world has seen what Ben can do and, yes, there has been some exposure to parts of his game in the playoffs. But any reasonable judge would say he’s a very talented individual with a whole lot to offer.”

While Simmons has been brooding, Giddey has been balling for the Thunder during an eye-catching pre-season that has earned the 19-year-old early rave reviews. The 203cm (6 foot, 8 inches) point guard stands to get generous minutes for an Oklahoma City side expected to struggle, yet Gaze believes that could give him time to grow and develop if the organisation shows some patience and faith in his impressive suite of skills.

“Let’s see how he handles 82 regular season games. And on top of that the expectations for OKC are very, very low. Whether that’s a good or a bad thing for him remains to be seen,” Gaze said.

“I think he will embrace that experience. It gives the organisation time to deal with the inevitable errors and challenges a rookie will face. It seems they are putting him in the right positions, the ball is in his hands a lot.

“It’s a great situation for him with his development. Nobody likes to lose but if you have a team with a plan for the future – and they have stockpiled about 7500 first-round picks – it’s easier to deal with some of the hardships.”

Australia will have seven players in the NBA to start the season, with Boomers bronze medal winners Mills, Matisse Thybulle (Philadelphia), Josh Green (Dallas), Joe Ingles (Utah) and Landale (San Antonio) all set to feature across the league.

Josh Green, point guard, Dallas Mavericks
“For me, you have a far greater interest in what he’s doing because of what he did with the Boomers. Liked him before but now I feel way more engaged. He’s been part of history for Australia and conducted himself magnificently. His ongoing desire to work on his perimeter game is going to be a big part of his progression. He’s very young and has very good prospects.”

Joe Ingles, forward, Utah Jazz
“It’s all about more of the same for Joe. He’s been outstanding. They are a team they would believe are in a championship window. His role isn’t going to change a great deal. There is no reason to think he can’t play at the level he’s played at for a long time.”

Jock Landale, centre/PF, San Antonio Spurs
“I think he’s lucky to be a part of that San Antonio culture. I think he is in a fantastic situation, a team that will be hoping to improve. Jock’s game is perfectly suited to a Gregg Popovich style of play. Runs the floor as well as any big man in the league, so that, combined with a willingness to pass, gives him an outstanding opportunity to forge and NBA career.”

Patty Mills, point guard, Brooklyn Nets
“If all the pieces were in place and Kyrie [Irving] was there, they would be the team to beat. Given the Kyrie situation [Irving refuses to be vaccinated and won’t play], there is a level of uncertainty and they would be grateful to have someone like Patty signed and not just because of what he brings to the court. It’s his culture, his attitude, his unselfishness, the way he brings people together, that is an incredible trait given the circumstances they are going through.”

Matisse Thybulle, forward, Philadelphia 76ers
”After seeing him play for Australia, he’s one of my favourite players. He is only going to get better, because he will improve his jump shot, but anyone with that type of approach to the game, that’s an excellent sign. To me, he’s a dinky-di Aussie. He looks fantastic and I’m excited about what he can do.”