At his lowest ebb, after suffering a third career-threatening ACL tear, Angus Glover considered giving away his chosen sport of basketball. And perhaps even taking up another one.

“I definitely had some of those days,” Glover said. “Halfway through my last two-year stint [on the sidelines], I wanted to go play AFL.

“I don’t know if the knee would have handled that very well. Mentally you just need to get over sitting on the rehab court and watching training all day.

“It was just a spur-of-the-moment thing one day where I just couldn’t hack it, sitting in the rehab facility any longer.

“I was ‘screw this, I want to play a different sport.’

“I think that lasted two days.”

Mentally and physically, injury has taken its toll on Glover. The Sydney Kings guard first ruptured his ACL at the age of 16. A few years into a promising basketball career, he did the other one. And then, just when he was on the road to recovery, he “slipped on a bit of water” and tore it again. That latest setback sidelined him for two whole years, restricting his Kings appearances to just two.

“I’ve had plenty of people tell me to give it up, but this is my way of proving them wrong,” he said.

“At the same time, I love the sport, so why would I give up something I want to play.” 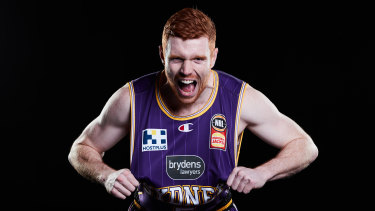 Sydney’s Angus Glover has had a long battle with injury.Credit:Getty

The latest comeback couldn’t have occurred had it not been for a helping hand – and hamstring – from his father Allan.

“With the first two ACLs, I used my own hamstring,” Glover explained.

“They can reuse the hamstring once it’s been used, so we went down the path of using my dad’s hamstring. It was very generous of him to offer his hamstring to me.

“We still joke in the family that he claims 50 per cent of the rebounds and assists and points that I get in a game.”

During the NBL Blitz, Glover has rediscovered the form that earned him a Boomers berth and has national coach Brian Goorjian earmarking him for future selection. The 23-year-old will get another chance to impress in his team’s final pre-season fixture, against his former team Illawarra Hawks at his old stomping ground at the WIN Entertainment Centre on Saturday night.

“It will be my first game in Wollongong since I’ve been back,” he said. “I’m interested to know what the reception will be.”

It will likely be warmer than when he runs out for the Kings at Qudos Bank Arena during the season proper. His girlfriend of five years, Sydney Uni Flames guard Kiera Rowe, will share the court with him on the same night on six occasions in the upcoming season.

“It’s going to be massive,” he said. “We have a double header ready to go with the Flames playing the Capitals and the Kings playing Melbourne United.

“That will be a cool spectacle to experience. Looking at the schedule, there are two games that the girls play after us, which I think is great for basketball.”