Former Australian NBA star Andrew Bogut claims the Victorian state government threatened to withdraw nearly $150 million of funding for basketball if Ben Simmons did not play for the Boomers against the USA at Marvel Stadium in 2019.

Bogut – speaking on his Rogue Bogues podcast – said that he, his Boomers teammates, and then-coach Andrej Lemanis felt pressured to bring Simmons into the squad despite their wishes not to, so as to avoid losing the funding and jeopardising the game in Australia. 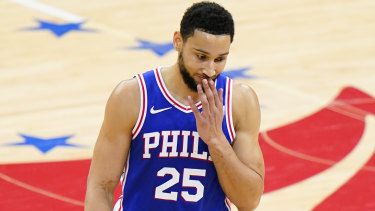 Ben Simmons did not play for the Boomers against the USA in 2019. Credit:AP

Simmons initially said he would play the USA games but not the 2019 FIBA World Cup, which followed.

The Boomers had decided they would only have Simmons in the team if he played in the World Cup too, because they needed the USA warm-up games to practice with the squad that would eventually try to win a medal.

However, Bogut says, once the team got wind that funding was on the line, they changed their decision and allowed Simmons to play just the warm-up games only. The funding comprised $148.5 million for stadium infrastructure and high performance development in Victoria.

“The call was given to Basketball Australia [from the Victorian government], it basically said this; ‘if you don’t let Ben Simmons play these two games in Melbourne that money is gone, we are not giving it to basketball in Victoria. We will do our best to get that number as close to zero as possible, and you will never get another dime from the Victorian government again’,” Bogut alleges. 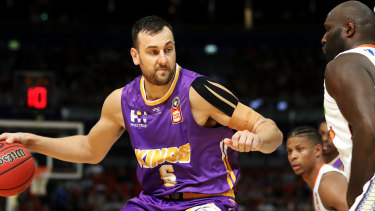 Andrew Bogut playing for the Sydney Kings in 2019.Credit:Getty Images

“He [Lemanis] came to the group. [He] said this is the situation we are dealing with … he said ‘if we don’t let Ben play in these two games we are losing funding for grassroots’.

“He said ‘I can’t have on my soul in my heart, I can’t have that I have taken away from young kids’ development … I am letting Ben play’.

“We came to an agreement where we said ‘let’s just play him the start of each half’ … and let’s treat the next 10 minutes of each half as kind of the regular rotations for what the World Cup would be’.”

Simmons participated in two Boomers practice sessions in the training camp before the USA games, and then was not seen again, Bogut said. He did not play the games and Bogut says, to his knowledge, the funding was not withdrawn.

A spokeswoman for Basketball Australia said a $130 million re-development of Wantirna South’s State Basketball Centre, funded by the state government, will begin this month.
The spokeswoman also said: “While we respect Andrew Bogut’s recollections of his involvement in the AUS v USA exhibition games, we can confirm that Basketball Australia has a very strong and longstanding relationship with the Victorian Government”.
“In relation to opinions surrounding Ben Simmons, Andrew is entitled to have his.”

Simmons’ agent, and the Victorian government have been contacted for comment.

The NBA championship winner said he had nothing against Simmons and understood there were times where playing for the Boomers were not possible.

Simmons was also paid by the Victorian government to promote the state as a tourism destination at the time, and he was used in the marketing in the lead-up to the games.

Simmons has been in the headlines recently because he withdrew from the Boomers squad that will go to the Tokyo Olympics.

Bogut said Simmons’ “rocky” relationship with the Boomers began in 2014 when he was cut from a world championships squad.