Home » Basketball » ‘We can match it with anybody’: Boomers topple Team USA

Joe Ingles declared the Australian Boomers now expect to beat any nation as they toasted one of the great wins in Australian basketball history with a 91-83 victory over Team USA.

Patty Mills, the star guard, poured in 22 points on 9-21 shooting, including 10 in the final quarter, and Ingles added 17 as part of a team-wide contribution to ensure the Boomers backed up successfully from their buzzer-beating win over Argentina on Sunday in an exhibition series in Las Vegas. 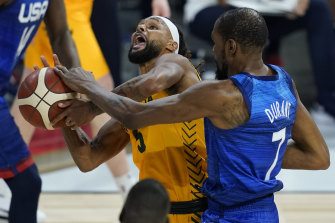 Patty Mills, who starred for the Boomers, is fouled by Kevin Durant.Credit:AP

This win has buoyed hopes the Boomers can finally win a medal at an Olympics – an achievement Ingles says “would mean the world” – when their Tokyo campaign begins on July 25.

The Boomers, ranked No.3 in the world, had beaten the top-ranked USA in an exhibition series in Melbourne in 2019 but this win is of far greater importance. 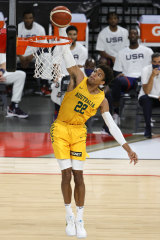 “We walked into this game expecting to win. We are not here to play these games and, not saying anyone is going in to lose, but I think … we have been building and preparing this team … for a long time for these moments,” Ingles said.

“Twelve years ago we started, and have slowly been getting better and better over these last few campaigns and, obviously, in the last couple [of Olympics], finishing fourth. We are right there and, obviously, we have proved it in the past we can compete and match it with anybody, so, obviously, it’s nice to win.”

Mills, one of two Australian flagbearers in Tokyo, said the Boomers were “not satisfied, we have a long way to go, we can still get a lot better but, as I said, it’s defence where we are going to hang our hat”. They will now play Nigeria on Wednesday.

Coach Brian Goorjian said frontline big man Aron Baynes, the starting centre, had escaped any structural or major damage but had a sore knee after colliding with USA guard Bradley Beal less than four minutes into the game. He did not take any further part in the contest.

Should Baynes, who most recently played with the Toronto Raptors, face time out, it would leave the Boomers with an undermanned frontline of Jock Landale, Nick Kay and Duop Reath for the rest of this tournament and potentially the start of the Olympic campaign.

Superstar American guard Damian Lillard had 22 points while Kevin Durant had 17 for a side now wondering what has gone wrong after a second-straight loss, having been beaten by Nigeria on Sunday.

The Boomers trailed 46-37 at half-time but a decision to open with a full-court press in the third quarter delivered what coach Goorjian wanted. The Boomers stifled their opponents and generated turnovers, while offensively they came to life.

They had a mix of contributors, with new Boomer Matisse Thybulle (12 points) continuing his fine form, whether from range or driving to the hoop. While Mills sat, Reath (9 points), Nick Kay (8 points) and Chris Goulding (11 points) had an impact off the bench, and when the latter nailed a three-pointer with a hand in his face at the buzzer to cap a 19-6 run, the Boomers led 69-64 and had visions of reprising their shock win of two years ago.

Beal took it upon himself at both ends of the court to lift the USA in the final quarter, and when Durant supplied a three, the Australians’ lead was cut to one point with 5.58 remaining.

Mills replied with a three, his first bucket of the second half, and he was pivotal from that point, whether that be scoring or distributing, as the Boomers held off a desperate Durant.

Team USA coach Gregg Popovich said his team had improved after a tournament-opening loss but fell away defensively and mentally and his team “needed more conditioning”. He said the Australians were “well coached”.

Lillard said the USA needed more time to gel after a short lead in and were adjusting to the more physical nature of the games where the referee calls they get in the NBA are not as forthcoming in the international arena.