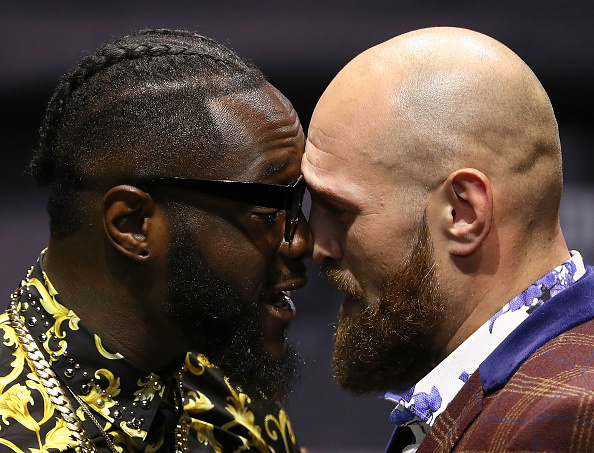 Tyson Fury and Deontay Wilder go to war once again in their trilogy showdown in Las Vegas this weekend.

After a controversial split decision draw in their first meeting in December 2018, ‘The Gypsy King’ produced a devastating performance to dethrone Wilder and win the WBC heavyweight title in February 2020.

Neither man has fought since, with plans for Fury to meet Anthony Joshua in a unification showdown falling through in the summer following Wilder’s successful arbitration case to enforce the trilogy.

Having parted ways with former trainer Mark Breland, who he accused of being involved in a plot to spike his water before the second fight, Wilder has enlisted the services of former opponent Malik Scott to plot Fury’s downfall this time around.

In what will surely be their last meeting, Fury hopes to end Wilder’s hopes of regaining the world title once and for all.

Here, some of the biggest names in boxing past and present, along with former opponents and sparring partners, give their predictions ahead of fight night.

‘I’m not too bothered. Look, because you’ve asked the question, let’s go with Wilder because he seems obsessed like he wants it.

‘He seems focused on the task ahead, so, you know, a focused man is a dangerous man and he’s focused. Wilder might get the decision. Actually, no, it has to be a knockout.’

‘I don’t think too much about who wins. It will be a good fight. Don’t write Deontay Wilder off since he always has the knockout punch.

‘I am not good at making predictions. The only prediction I give you is that I’ll have a fantastic dinner tonight.’

Prediction: On the fence

‘You can just never tell with someone like Wilder and their punch power. It can all end in one round. Tyson has got to be on his game.

‘But I can’t see any other result than Tyson getting the win again. I think we could see a similar outcome, it could finish even sooner. For one, Wilder will still be mentally affected from what happened last time. And two, Tyson is in unbelievable condition.’

‘I think the only way Wilder gets into this fight is if gets off to a quick start and grows in confidence from there.

‘But if Tyson gets going right from the first bell like he did last year, I think Deontay Wilder will chuck the towel in again.

‘If that starts happening, his mind will automatically cast back to the second fight and he will be thinking: ‘Oh God, here we go again.’ I do think Tyson will win in similar fashion, maybe a little bit sooner.’

‘You know, Deontay Wilder has nothing to be sad about or nothing to complain about, he’s fought great fights… I just think Tyson Fury has his number.’

‘His new coach Malik Scott is super-knowledgeable. I’ve brought him over for sparring before and he is a guy who has been there, seen it, done it.

‘He understands the game. I’m not sure he can change Wilder but he might be able to smooth off some rough edges. Wilder just needs that power back.

‘It’ll be explosive early on — one of the fights of the year — but I don’t think Fury has the 12 rounds in him he had when he beat Wladimir Klitschko in 2015.

‘He doesn’t have the element of surprise he had second time around against Wilder either, when Wilder was preparing for a long boxing match and got bum-rushed.

‘Fury is going to win on points or he’s going to get knocked out. It’s 50/50 and it depends on what kind of mental state Fury is in because that also reflects his physical shape.

‘We know in my rematch, that didn’t happen. He got into cocaine and other issues.

‘There seems to be some unstableness with discipline and we don’t know. It’s like a gamble, you throw the dice and you just observe what is going to come up.

‘So we don’t know what mental shape Fury is going to be and in a certain way, I wish he is going to win.’

Winner: On the fence

‘I’m rolling with Deontay. How can I roll with a dude across the pond? I’ve been watching Deontay’s videos and he’s been looking sharp. Now he’s throwing combinations to the body.

‘He has somebody his height. Hooks to the body. Hooks to the head. 1-2-3’s and things like that. Uppercuts. A lot of things that he was missing.

‘A lot of times he was just a 1-2 fighter. It’ll be good to see him able to switch things up. I’m hoping Deontay Wilder gets his payback and just dues.

‘It looks like he’s been training hard and staying focused and getting in shape. I wish him the best. I hope he gets the big knockout.’