This is the fight Paul Gallen didn’t want to happen.

And yet there he was, sitting ringside with microphone in hand, getting a sneak peak at what he can expect to face in three weeks. 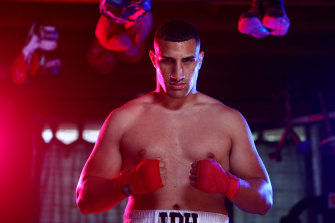 Queensland heavyweight Justis Huni improved his perfect record to 4-0 in Sydney on Wednesday.Credit:Getty

What transpired on Wednesday night had the potential to scupper Gallen’s anticipated showdown with Justis Huni, the biggest payday in the careers of both men.

It was a bout between Huni and Christian Tsoye, performed in front of a handful of journalists, sponsors and Gallen at the International Convention Centre.

Huni produced a sublime performance to defend his Australian heavyweight title via a unanimous points decision (99-91, 98-92). The Queenslander dominated the 10-round affair from the outset, seemingly landing every blow but the knockout variety.

“I’m just happy to get the rounds out and now on to the next one,” Huni said afterwards. 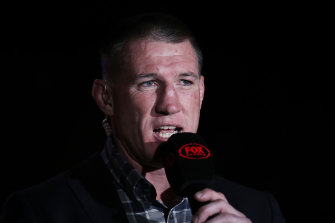 Asked if he had a message for Gallen, Huni said: “Showtime. Let’s get it on.”

The 22-year-old displayed all the skills that have him earmarked as one of Australia’s best medal prospects in Tokyo. There was the lightning jab, the heavy body shots and, perhaps most importantly, the ability to take the occasional punch that Tsoye slipped through.

Commentating on the fight, Gallen was as impressed with Tsoye’s durability as Huni’s accuracy.

“I don’t know if he can hurt this bloke, [Tsoye] is never in trouble,” Gallen said. 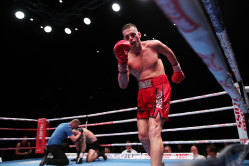 “He’s hit him with some flush shots and he hasn’t wobbled once.”

Gallen has played to packed stadiums and Huni aspires to. This, however, was the most intimate of settings. Every blow reverberated around an arena that can hold 9000 but on this occasion catered to about 100 onlookers.

Tsoye is a man of few words. After standing on the scales at Tuesday’s weigh-in, two kilograms lighter than Huni (106.9kg), he said only: “I’m going for the knockout.” It never came.

The Cameroon-born fighter, who enjoyed a decorated amateur career, was considered little more than a tune-up for Gallen. When the fighters had their obligatory face-off on fight eve, Tsoye refused to be photographed in front of a huge poster promoting the Huni-Gallen fight. He came into the event a massive 14-1 outsider, yet good ringside judges predicted Tsoye would provide Huni with a sterner test than Gallen.

And yet if Huni suffered a loss or injury, his fight with Gallen – the most lucrative of either of their careers – would be off. Huni escaped unscathed and both will now cash in.

This could well be the most unusual journey to the Olympics of them all. Instead of joining his Boxing Australia teammates in a high-altitude camp in Colorado, Huni’s two lead-up fights were held in an empty stadium, and then against a former footballer.

There is as much interest in what Huni does in his fight with Gallen as his quest for gold in Tokyo. In successful in both endeavours, he will instantly become a household name.

In the sole lead-up fight, Isaac Hardman defeated Robert Berridge in their super-middleweight clash by TKO.