Home » Ebanie Bridges on overcoming the pain barrier: 'I’m proof that you can be feminine and still fight harder than a man'

Ebanie Bridges is pondering her image again – but not in the way you think. Her left eye is horrendously swollen so modelling, she jokes, will have to wait.

The Australian bantamweight felt discredited as a gimmick in the build-up to last weekend’s fight with Shannon Courtenay, which although she lost may be reviewed as the moment a new boxing star was born.

“My weigh-in broke the internet,” Bridges laughs three days after falling short against Courtenay in a fight which stirred an engrossing rivalry in a way that women’s boxing hasn’t always seen. By its conclusion, Courtenay became WBA world champion but the Bridges story is far from over. Bridges’ decision to weigh in wearing lingerie was her way of “embracing femininity” but Courtenay argued it wasn’t how to be “a role model”. The only way this side-show could be truly contextualised was by what happened inside the ring, when Bridges valiantly battled to the end despite her eye grotesquely swelling shut.

“I was doubted the whole time – ‘someone who looks like that can’t be tough’,” Bridges tells Sky Sports.

“Men have quit from less than that.

“I’m happy that I was able to show everyone I’m a real fighter, a true fighter.”

Her willingness to embrace a playful personality, plus the glaring lack of footage of her five previous fights which was an intentional ploy to spring a surprise, meant Bridges was not expected to show the type of gut-wrenching toughness that was required when one eye became unusable. 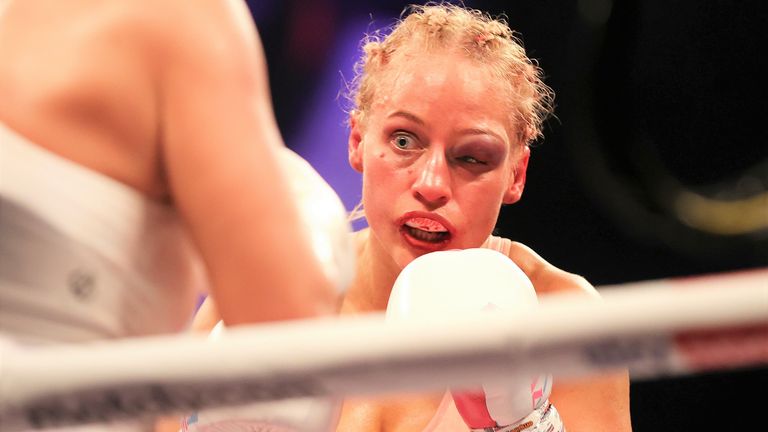 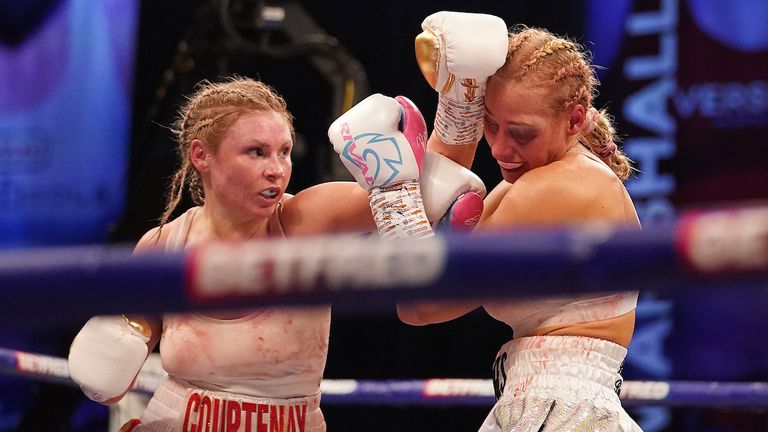 But that survival instinct was no shock to Bridges, whose backstory of emerging throughout a traumatic teenage period taught her resilience.

“I’ve done martial arts since I was five,” she says. “When I was eight I did planks on my front two knuckles, holding it until I was crying and wanting to quit, but I was told not to. I was kicked while in a plank position.

“Through my teens I went to hell and back. I was lucky to survive.

“Bodybuilding changes you more than you can imagine. The discipline and the push through fatigue to grow muscle. I would cry through workouts but never quit.

“When you quit, you don’t achieve. Pain is temporary, pride is forever.”

In Bridges’ pro boxing debut, just two years ago, she broke her ankle in the first round but still won the fight – “I was dragging my foot behind me,” she says. Perhaps we should have seen her willpower coming.

“I know how much heart I have,” she says. “Never in sparring, never in life, have I given up. So that did not shock me at all.” 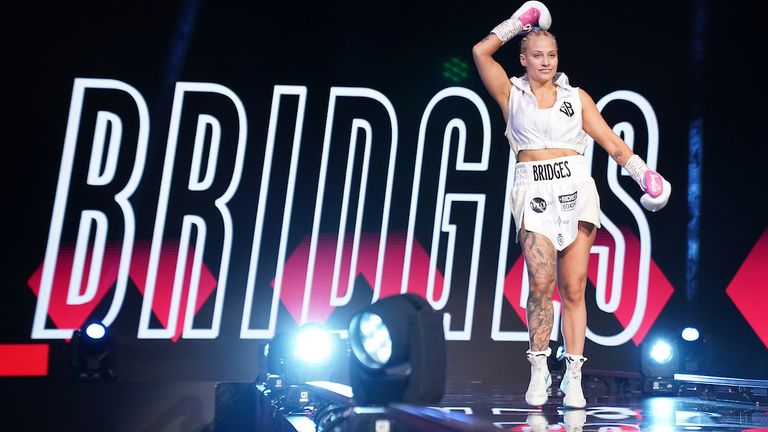 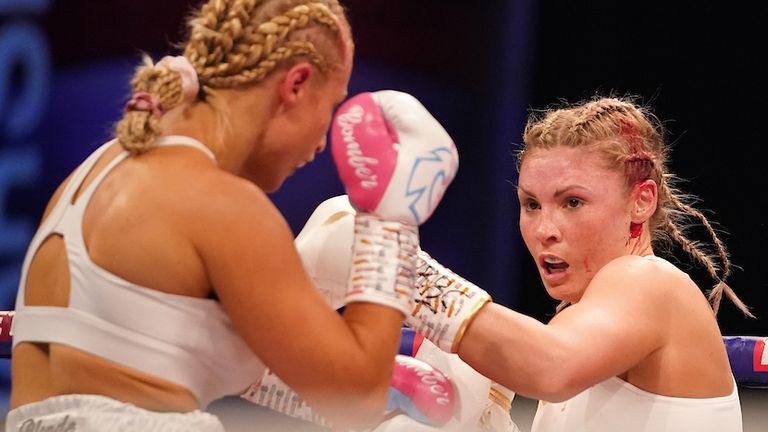 The galling moment where Bridges was forced to deal with a crisis was prior to the last round. Swelling around her eye, caused by an accidental clash of heads she insists, had now temporarily blinded her. She told her corner team that she couldn’t see and was brave to continue at all.

Her thoughts in that moment, she explains: “I thought: ‘I hope the doctor doesn’t ask me if I can see’.

“No way would I have said no. I would have said: ‘Of course I can see!’

“No way would I have stopped. I would have fought with no eyes.

“The doctor was looking at me and I was just praying: ‘Please don’t ask me’.

“I only told my trainers so they understood why I couldn’t see her right hand.”

There was mutual respect after the blood-soaked battle which Courtenay won via unanimous decision to win the WBA belt.

“The first thing she said was: ‘I really underestimated you’,” Bridges says. “And I underestimated her a bit too. But I gained her respect immediately.

“She lifted my hand at the end because she recognised warrior spirit – I appreciate her for that.

“We have respect for each other because we put on one of the best female fights that people have witnessed.” So, next time, should we expect to see Bridges “wear a bin bag” like she has joked to appease the critics?

“I won’t change for anyone,” she says. “It’s important to be you, be real. Don’t judge each other.

“I could have toned it down, not put myself out there. I could have changed myself to please the purists. But my goal was bigger – it was to get more eyes on the sport, more people tuning in to watch me fight.

“I know my style is fan-friendly and, if you didn’t previously like women’s boxing, you would like it after seeing me.

“I’m proof that you can be feminine and still fight harder than a man.

“I was confident and that’s why I didn’t change. I told you all – you’d see exactly how serious I was when I jumped in the ring.” 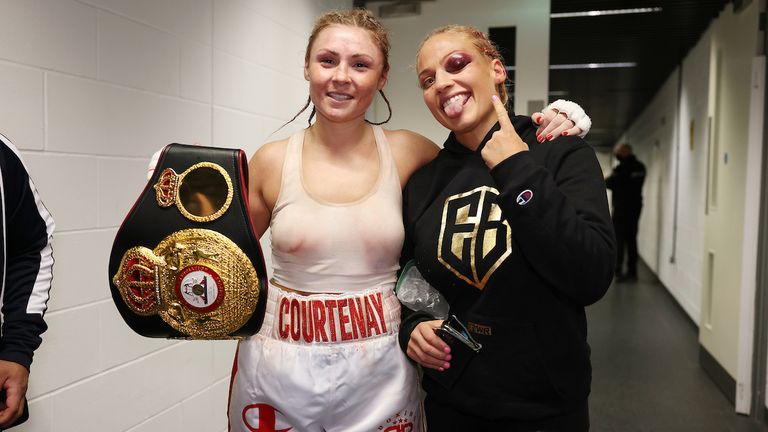 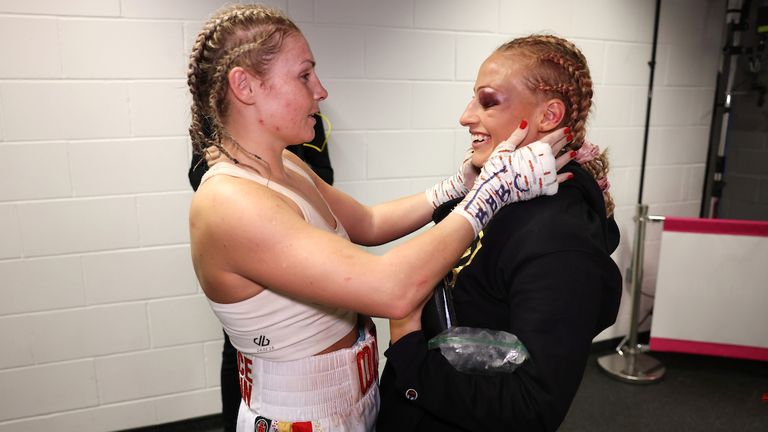 Bridges’ next move is undecided but there is no plan to return home to Australia yet, and she hopes for a return to the ring in June. The schoolchildren she teaches maths to will only see her via Zoom. Boxing is, if you hadn’t yet realised, not a gimmick to her.

“You don’t see anything I do in women’s boxing. I am different,” she says.

“I’m not Katie Taylor. And I don’t want to be like anyone else. I want respect for who I am, and that’s why I refused to change. I refused to listen to people who told me I was disrespectful.

“I brought more eyes than ever to my fight – that’s how much I respect my sport.

“The heart that I had? That shows how much I respect boxing.

“I did justice to the sport for getting people to watch. They will want to watch me again.”