Eddie Hearn has revealed he spoke to Floyd Mayweather about his exhibition bout with Logan Paul at Anthony Joshua’s fight with Kubrat Pulev last weekend. Money made a surprise last-minute appearance, stopping by at the SSE Arena, Wembley to see his friend AJ close the show with a highlights reel knockout against the 39-year-old Bulgarian.

Whispers emerged from inside the arena before the main event that Mayweather may be in town, something that was relayed by Sky Sports’ Head of Boxing Adam Smith during commentary.

To everybody’s surprise, the undefeated boxing legend rocked up with his crew to watch Joshua successfully defend his WBA, WBO and IBF world heavyweight titles from ringside.

Throughout the contest, Mayweather could be heard shouting for Joshua to use his jab before he finally made Pulev crack in the ninth round.

Joshua dropped the IBF mandatory challenger in the third but the seasoned veteran hung in there before being knocked out by a dynamite straight right. 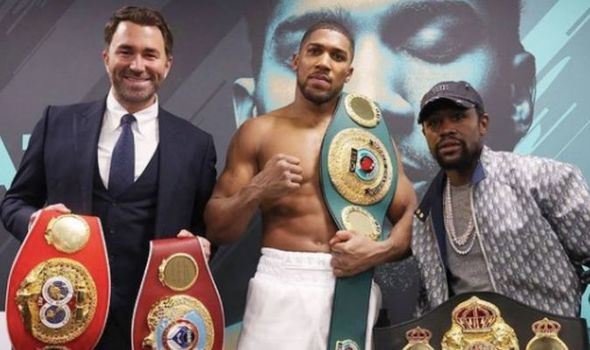 Matchroom Boxing chief Eddie Hearn posed for pictures backstage alongside his fighter Joshua and Mayweather, holding up his man’s belts after the impressive victory.

Now Hearn has revealed he even had a chat with Mayweather about his upcoming exhibition with Logan Paul in February, which was announced earlier this month.

“I’m going to take a little bit of a sabbatical from the YouTube stuff,” Hearn told iFL TV, referencing last November’s card in Los Angeles which was headlined by YouTubers Paul and KSI.

“I kicked the ball off last year and now everybody is trying to do it.

“I actually said to Floyd on Saturday night when he was at the AJ fight, ‘you need to be careful, this is a very, very tough fight you have with Logan Paul’.

Mayweather will reportedly net $5million (£3.75m) upfront plus 50 per cent of all the PPV sales.

He could have up to a four stone weight advantage over Mayweather and he currently stands six inches taller than his opponent. 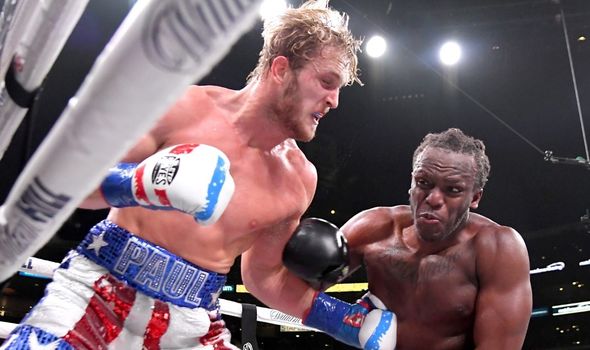 Many have turned their noses up at the event given that Paul could not beat YouTuber KSI in his only professional contest.

Mayweather has not fought professionally sine he retired in 2017 after beating ex-UFC champion Conor McGregor in Las Vegas.

But he has since fought in an exhibition match against Japanese kickboxer Tenshin Nasukawa, destroying his opponent inside the opening round.

The bout is due to take place on February 21 with a venue yet to be confirmed.