Home » Boxing » Frazer Clarke is Britain's super-heavyweight Olympic hope – 'They all thought it would never happen, now it's in my hands'

Frazer Clarke has spent the past 12 years on the outside, looking in. Always hopeful, occasionally desperate, his willpower never compromised.

He missed out on qualifying for two Olympics, forced to instead watch through gritted teeth as Anthony Joshua won gold at London 2012 and then as Joe Joyce was controversially limited to silver at Rio 2016.

He was stabbed three times, and was helpless when he was caught up in the Westminster terrorist attack – so close that he saw the perpetrator shot dead by police. 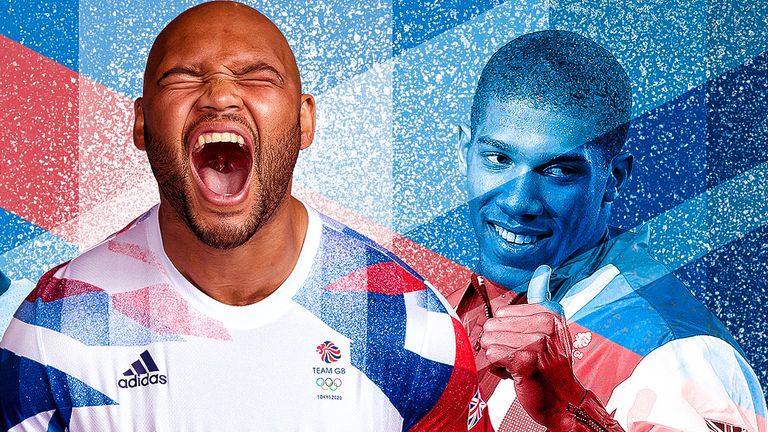 BRING US BACK A 🥇[email protected] is proud to captain Team GB's boxing squad and is a real threat to the super heavyweights in Tokyo💪 pic.twitter.com/lQY0WurIGA

And he looked longingly into the ring during his role as a security guard, watching heavyweight fights and thinking: ‘I could beat that guy’.

Finally, it is Clarke’s time to revel in a spotlight he has chased for over a decade. The feelgood story, and the team captain, of Great Britain’s 11-strong travelling squad of boxers to Tokyo 2020 is the super-heavyweight Clarke who will fight for gold on his third (and final) attempt.

“It has been a long time coming,” he tells Sky Sports bashfully, correcting himself as he tries to describe the emotion politely. “Delighted is one word I could use to describe it!”

There were times, he has said, where Team GB Performance Director Rob McCracken had to personally battle to keep Clarke around when it seemed he may never fulfil this potential.

“If you don’t know my story? Please, just work hard and things will happen for you,” Clarke says.

He takes his role seriously as an example to others.

“You have to be consistent. Keep working at things. Believe in yourself and surround yourself with good people. It’s not over until it’s over. That’s a message I want to give to youngsters – sometimes you fail at the first hurdle but you can get back up, go again.

“A huge weight has been lifted from my shoulders. I’ve wanted this for a long time and I let the pressure build and build. This journey is like snakes and ladders, there are ups and downs.

“GB Boxing kept me focused when I was unfocused.

“I am mature now. I understand what it takes, in terms of outside the ring.” 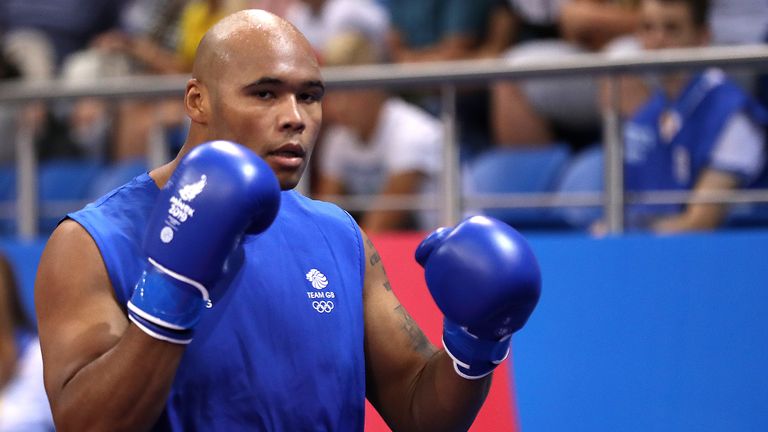 Clarke enjoyed a beer and a pie, he freely admits. Now 29 and a father, this lad with a tattoo of Del Boy from Only Fools and Horses has mellowed.

“For a long time, Monday to Friday…”

Clarke is trying to explain his less disciplined days but, with a wry smile, decides to be even more honest.

“No, not even Monday to Friday. I would train then go outside the ring and live a normal life,” he says.

“It took me a long time to realise it’s not a game about being in the gym, it is 24-7. You have to live the life as an ultimate boxer always, a professional and an athlete. Maturity has definitely helped. The birth of my kids really changed me, and my beautiful partner helps me a lot.”

He has come through two life-threatening situations on this unique journey.

In 2016, a nightclub brawl resulted in his stabbing. He has since become a vocal anti-knife campaigner.

A year later, Clarke and three other Team GB boxers were caught up in the Westminster terror attack where four people, plus the terrorist, were killed.

“I’ve just scraped out by the skin of my teeth and I’ve gone home to my family. Some people didn’t get to do that that day,” he told Tokyo2020.org at the time.

Clarke made his name as a long-time sparring partner of Anthony Joshua’s.

More painful still was having to look on from outside the ring as Joshua and co stole the headlines. Clarke worked as a security guard in his early 20s, his size and physicality making him a natural fit to restore order at chaotic boxing events.

When Joshua and Dillian Whyte (plus enraged members of their teams) brawled after the conclusion of the first round of their fight in 2015, it was a young Clarke who burst into the ring to separate the warring factions.

“I loved it. It was one of the best periods of my life,” he says.

“As a boxing fan, I was living a dream. I was a 17-year-old boy with talent but, at the weekends, got up to the wrong stuff.

“I saw first-hand behind the scenes and enjoyed it so much. I was there to keep people safe but I had the best experience by sitting at ringside to watch people I look up to, people I aspire [to be like].

“It was also a difficult experience because it got to the stage where I saw people getting a lot of applause but I thought: ‘I can beat these guys!'” Did he truly stand there silently wearing uniform, thinking he could knock out the superstar heavyweights inside the ring?

“One hundred percent. We are confident people. Ask me how I’d fare against an 18-year-old Mike Tyson? I’d say that I would win. That’s the way I am. Being there first-hand? I thought to myself: ‘I will do alright when the time comes’.”

But the most pressure may come from within – Joshua and Joyce, his super-heavyweight predecessors for Team GB, came home with gold and silver and have since become fearsome professionals.

“You could call it pressure,” he shrugs. “They had their own journeys and I’ve got mine. I’ll do what I do – box well and win. I am an individual. They are fantastic but I will do things my way – hopefully, that entertains people and is successful as well.”

Clarke has shared a ring in the amateurs with current pros Joseph Parker, Tony Yoka, Sergey Kuzmkin and Otto Wallin. Bakhodir Jalolov of Uzbekistan is the most fearsome threat to the gold medal at Tokyo 2020. He has taken advantage of the new rule which allows professional boxers to enter the Olympics. Jalolov is the reigning amateur world champion, crossed into pro boxing to win eight fights via quick knockouts, and will now go back to the amateur rule-set in Tokyo.

“It doesn’t sit well with me, personally,” says Clarke.

“I am old school – you are an Olympian, an amateur boxer. But the world is changing. I’m not saying it’s right or wrong. But for me? You make the sacrifice and the stepping stones. This is the apprenticeship then you go into professional boxing. That’s how it’s always been. We will bring you exclusive access to @gbboxing in Tokyo💪🇯🇵

We wish them the very best and hope to see as many as possible on a podium🥇#TeamGB pic.twitter.com/uCmNppTy1e

“Amir Khan and James DeGale didn’t turn pro until they had their success at the Olympics. I would like it to carry on like that but the world is changing all the time.

“I don’t know what this will mean for the next Olympics.”

Justis Huni of Australia has won five professional fights inside the past year and, like Jalolov, planned to cross back to the amateur code for the Olympics. But in his most recent professional fight, a knockout of a former rugby player, he injured a hand that will rule him out of Tokyo 2020.

So is see-sawing between amateur and pro a disadvantage?

“It is a different sport so it definitely could be,” Clarke says. 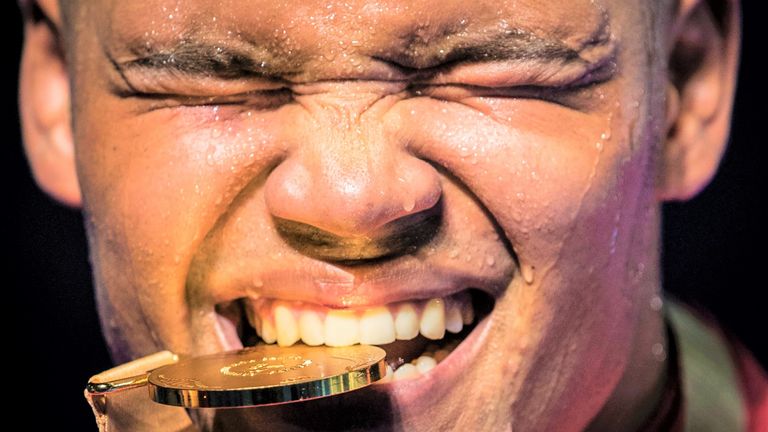 On his gold medal rival Jalolov, Clarke says: “These guys are clever and are matched well. He has been [into the fourth round just once]. So it won’t affect him that much. This is a different pace and if your head is somewhere else? But these teams and countries are not daft.”

Clarke won the 2018 Commonwealth Games to represent a new dawn in his career, when he was taking himself seriously and therefore should be taken seriously by his rivals.

“I’m a smart boxer, I am experienced,” he warns his rivals. “I probably need a better defence! I’m always in exciting fights, people tell me I am exciting for one reason or another!

“I dish it out, I’ve got fast hands, good thinking, good feet, I’m strong, I can really box. When it’s time to grit and bite down on the gumshield? I can do that as well.”

Clarke has been in and around the Team GB training centre in Sheffield since 2009 when he first began a journey towards the Olympics that twice fell apart.

Since then, Anthony Joshua’s picture has been added to the wall alongside Audley Harrison’s (2000 super-heavyweight gold medallist) and other Olympians whose legends are secured.

“It is a dream,” says Clarke as he wistfully looks up at his heroes on the wall.

“The medal ceremony will be fantastic but, more than that? To walk back into this gym after 12 years and to see these guys? To have my face in this gym?

“I’d bring my kids. I’d bring half of Burton! They all probably thought it would never happen. Now it’s in my hands and I’ve got the chance to make it happen.”