The only person more embarrassed than his opponent was  Hodgo  himself. 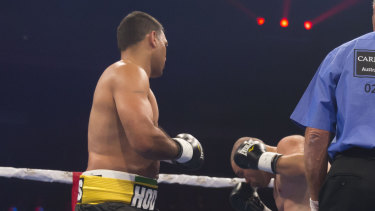 Gone: Troy McMahon heads for the canvas after 23 seconds.Credit:AAP

This time the victim was Kiwi "corporate boxer" Troy McMahon. Hodges’ pro career, spanning two bouts, has now extended to a total of 98 seconds. Thankfully, this isn’t the sort of event bookmakers take money on.

In total, Hodges threw four punches. Three of them landed. After being clocked by the final one, McMahon crashed to the canvas. Hopefully his corporate boxing career lasts longer than his professional one.

“It leaves an empty feeling in your gut," Hodges said.

I hurt him in one hit and I didn’t want to hurt him anymore. I’m not here to hurt anybody.

“You train hard and want a good fight. I don’t have any bad feelings towards him. He took the fight on late notice, we had a couple of guys pull out.

“He could have knocked us back too but he accepted.

“I hurt him in one hit and I didn’t want to hurt him anymore. I’m not here to hurt anybody.

“I love boxing, I’m having a go and I tried to do the right thing by him by not hurting him.

Once again, Hodges refused to pick on someone his own size. His first opponent was furniture removalist Rob Baron, who entered the ring more than 13 kilograms lighter than the former footballer. At least he lasted 75 seconds.

On Wednesday night, Hodges again made short work of a much shorter man. Hodges, at least a head taller, weighed in at 103.3kg. New Zealander McMahon tipped the scales at just 91.4. 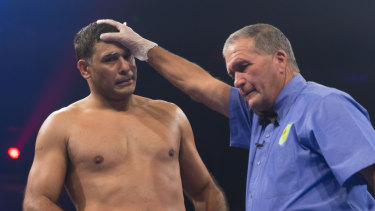 All over: The referee puts an end to the fight.Credit:AAP

“You don’t fight champions in your first of fights, you ease your way into it to get up your confidence," Hodges said.

Before he crossed the Tasman for the bout, there were reports that McMahon was a “Paul Gallen clone”. Upon arrival, it was clear he was a very pale imitation. While stocky, he had none of the pugilistic skills of the veteran Sharks forward, who has been touted as a future Hodges opponent.

What McMahon did have was the element of surprise. This was his first fight, so there was no footage for Hodges to study.

Asked what he knew about McMahon just minutes before the official weigh in, Hodges said: “I don’t know, I haven’t seen him. I haven’t got a clue what he looks like.”

When they faced off for the first time, hamming it up for the assembled media, McMahon shaped up with his fist at Hodges’ ribs. It’s as close as he came to landing a blow.

Hodges’ preparation couldn’t have been more relaxed. One of his main sparring partners was another former footballer, Lote Tuqiri. Fox Sports, one of Hodges employers, gave him time off during Magic Round to prepare. He didn’t need it.

When the fight was over, the crowd jeered.

“I don’t care about the crowd, the crowd doesn’t bother me," Hodges said.

"I spent 18 years playing rugby league. At the end of the day, they’re the ones booing. They should get into the ring and have a go themselves.

“It’s easy to sit on the sidelines and boo people. I’m not in control of things, I’m here to fight. I did what I had to do.

It felt like half of the NRL was in the audience. Cody Walker, Damien Cook, Adam Reynolds, Latrell Mitchell, Andrew Fifita, Josh Dugan, Braidon Burns . . . the list goes on.

They witnessed some good fights. This was not one of them.