Home » Boxing » ‘I’m doing it in the big league’: Kambosos says Aussie fighters talk too much

Sydney’s contender for boxing’s undisputed lightweight crown, George Kambosos Jnr, says Australian fighters spend too much time talking about world titles and need to get on a plane and go and chase them as he prepares to meet Teofimo Lopez (16-) in Miami on June 19.

Kambosos (19-0) has been a road warrior since his last fight in Australia in 2017. Since then, he has put together a six-fight winning streak across the US, Asia and the UK and established himself as the IBF’s mandatory contender for Lopez’s IBF, WBO, WBA and The Ring lightweight titles. 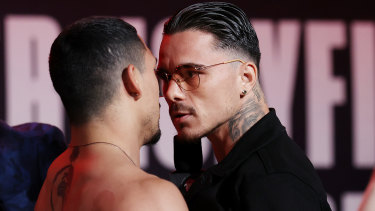 Teofimo Lopez and George Kambosos Jr. face off during a press conference in April.Credit:Getty

The 27-year-old doesn’t have the local profile of contemporaries like super welterweight contender Tim Tszyu but has played the long game to earn his shot at one of the most-hyped fighters in the sport, with Lopez having swept the division with a unanimous decision over Vasyl Lomachenko late last year.

And he has some advice for rising stars like Tszyu, who meets Michael Zerafa in Newcastle on July 7: Stop making excuses, get on a plane and jump in the deep end in the famous fight gyms of the US.

“It’s a big difference from talking about it and doing it. I wanted to take the risk early in my career and come over here with the big fish. Some people are comfortable being a big fish in a small pond. That’s great. That’s fantastic,” Kambosos said.

“But when you look at yourself in the mirror, how can you really say ‘I’m this and that’ or ‘I’m number one or two in the world’. But who have you really fought? Who have I beaten that’s a big game? 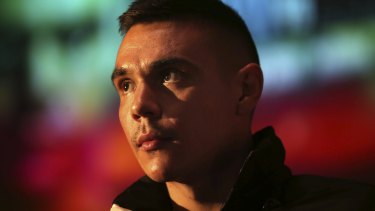 Kambosos says local stars like Tim Tszyu simply won’t get the big fights in Australia and must base themselves in the US.Credit:Nine

“It’s a whole different level over here. I can’t tell them to come over here. That’s up to them, that’s inside them. That’s the iron grit and willpower to really be someone and build your own legacy. If you want to do it, you’ll come over here, pandemic or not.”

Winning away from the comforts of home – and occasionally home judges – is one of boxing’s great challenges but Kambosos has been inspired by the feats of other Australian ring warriors like Michael Katsidis, another tough campaigner with Greek heritage.

He said Australian fighters with real title ambitions shouldn’t use the restraints of the pandemic as an excuse and shouldn’t take the word of promotors promising to lure huge international names to Australia with the promise of big pay days.

“I’m here. Don’t worry about the pandemic. Come by yourself. You don’t need a big team. Pack your bags like I’ve done so many times, get on that plane by yourself and go to the different gyms, open your opportunities,” Kambosos said. 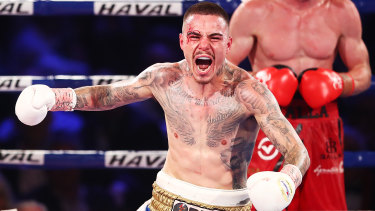 George Kambosos Jr. after winning his last fight in Australia in 2017.Credit:Getty

“Some fighters want to have that progress of staying in Australia and trying to get big fights. You try to big guys overseas to Australia but you just aren’t going to get these guys Down Under. It’s very, very hard. We tried with Lopez. You just won’t get the big fish doing two weeks of quarantine. It ain’t going to happen.

“Pack your bag, pack your gloves, come to the US and make it happen where the big boys are. I’m doing it in the big league.”

Tszyu looks well placed to take care of Zerafa, who had had a disrupted preparation, but has been dismissed as a genuine threat by America’s WBC, WBA and IBF champion Jermell Charlo. Tszyu countered by saying Charlo would have no choice but to fight him once he earned a mandatory shot.

The easiest way to settle it might be for Tszyu to ensure Zerafa is the last of his domestic engagements, follow the advice of Kambosos and strike out to the US, where his famed father Kostya established himself as a household name in the sport.