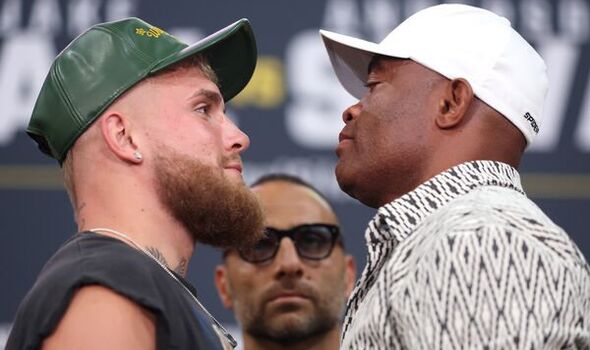 Jake Paul is set for the biggest test of his boxing career this weekene when he steps into the ring with one of the most dangerous fighters in UFC history in Anderson Silva. The Brazilian long held the UFC record for most knockouts in the company, whilst also still holding the longest winning streak of all-time with 16 as he stepped away from mixed martial arts to take up boxing two years ago. Since then, Silva remains undefeated in the ring, defeating Tito Ortiz and Julio Cesar Chavez Jr – who once went 12 rounds with Canelo Alvarez.

Silva will be the third MMA star which Paul has come up against in the boxing ring, after previously knocking out Ben Askren and Tyron Woodley – beating the latter twice with the second coming by way of a sensational knockout at Madison Square Garden.

But Silva presents a much more difficult ask then all previous opponents of which Paul has faced, with real boxing experience and having beaten a former world champion in Chavez Jr. Although at the age of 47, Silva remains in great shape and had been the bookmakers favourites when the fight was first announced. Now though, Paul has become the favourite ahead of the fight in Arizona.

UK fans will be able to watch the fight exclusively on FITE TV, with the main event set to get underway at around 4am. It will cost you £17.99 to watch the fight live, along with the undercard which features former NFL superstar Le’Veon Bell facing former UFC star Uriah Hall.

FITE TV will also be available to be downloaded on an app on your mobile phone or tablet device, so fans can watch the fight if on the move. And just days later, SHOWTIME will release highlights of the fight on their social media platforms as well as on their YouTube page, with fans being able to see the outcome for free.

The two fighters have bet on the outcome of the fight, with Paul agreeing to face Silva in a kickboxing – in which the Brazilian specialises in – if Paul loses, with Silva shaking hands on a deal to start a company with Paul to look to provide UFC fighters with better pay and health care – something the American has been heavily critical of Dana White for.

If Paul is to defeat Silva, he is then expected to face British opposition in 2023 – with two names on his agenda in KSI and Tommy Fury. Paul has a long-standing feud with both men after KSI beat his brother, Logan, in a 2019 bout. Whilst Logan and KSI are now friends and have co-founded a business together (Prime), he and Jake remain bitter enemies.

Paul has attempted to fight Fury on two separate occasions with the British boxer forcing to pull out of their first fight after breaking his ribs and suffering with a chest infection. Earlier this summer, the two announced a fight once again, with Paul having to change opponents after Fury was denied a VISA to fly to the United States.

Fury is also set to fight in the coming weeks, when he’ll be on a Floyd Mayweather undercard, who is set to face KSI’s brother Deji.