Tina Rahimi has vowed to fight on to the Paris Olympic Games in 2024 after the history-making Muslim boxer fell just short of the gold medal bout at the Commonwealth Games in Birmingham.

Rahimi fights in a hijab and is the first Muslim woman to represent Australia in her sport. Her story has been captivating and the interview requests from around the world mounted as she made her way through the tournament. 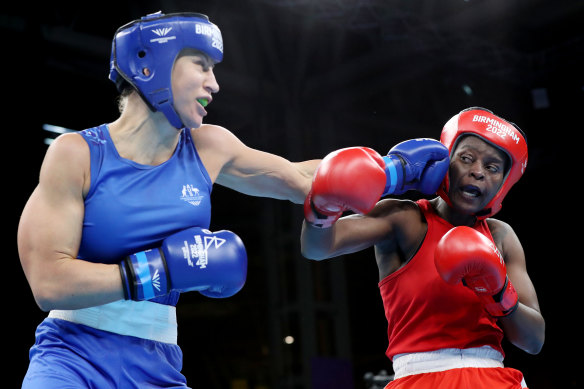 But after a dominant quarter-final outing, Rahimi couldn’t find the answers against quality Nigerian featherweight Elizabeth Oshoba, who won a split decision thanks to an accurate and patient display in the final round as Rahimi tried desperately to bulldoze her way to the gold medal bout.

Oshoba took the first round before Rahimi had the better of the second, reverting to the more aggressive, hard-charging style that earned her a semi-final berth.

It was there for the taking but Oshoba made some good adjustments with the fight on the line, catching Rahimi numerous times in the third as the Australian tried to press forward. She’s a brave scrapper but knows she needs to sharpen her movement and add combinations if she wants to be truly world-class.

Rahimi was naturally disappointed but said the immense support she had received had convinced her to press on and try and fight at the Paris Games.

“I just want to inspire people around the world, the ones who see me and think it was something they weren’t able to do. It’s great to see people looking at me and thinking ‘wow’. It makes me feel better,” Rahimi said.

“I think it got a bit scrappy now. I think I just really, really wanted to win and make sure I really worked on the inside. But coming in I feel like I got tagged a little bit. I wasn’t thinking as much as I should have.”

Earlier, a teenage prospect who trains in sneakers and fights in soccer boots and a trailblazing female fighting veteran gave Australia the perfect start as Callum Peters and Kaye Scott progressed to the gold medal bouts.

Scott worked well off her jab and landed the more quality shots as her opponent drove forward with flurries of punches. There was little in it but Scott, now 38 and a welterweight bronze medallist from 2018, kept her cool as the referee raised her hand. 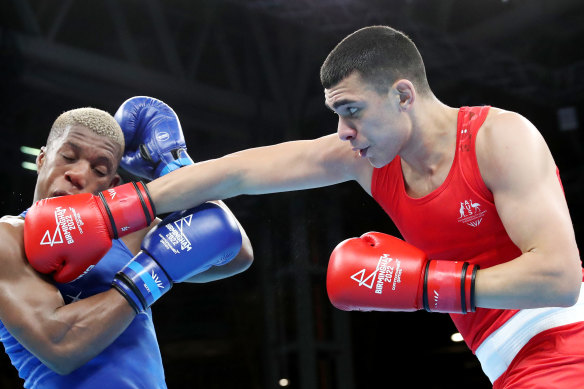 Callum Peters is a natural in the ring, a silky mover and changes his lead hand when he sees an opening.Credit:

She has been a mainstay of women’s boxing in Australia and advocated for the sport as it sought equal footing. Scott said she used to knock on doors to sell chocolates to fund her travel and a gold medal would be her crowning achievement.

“I can’t even put it in words. It just means so, so much to me and my family and everyone else who has supported us on the way,” Scott said. “It’s been a tough journey. I remember right back to the beginning, even though I was No.1 in Australia I was selling Cadbury fundraisers door-to-door just to go to the World Championships.”

Peters is at his first international tournament and looks an outstanding young fighter. Already, he has leading promoters in Australia vying for his signature, but he has plenty of business left to finish in Birmingham and onto Paris in 2024.

He is a natural in the ring, a silky mover and changes his lead hand when he sees an opening. Interestingly, he doesn’t fight in the high-top boxing shoes favoured by almost every boxer but wears low-cut soccer boots designed for indoor football.

“This is my first international tournament, I’m still learning the ropes. New events, new people, I’m very excited,” said Peters, who is one of nine children. “Let’s see what happens.”

Heavyweight Edgardo Coumi had some good moments against imposing Englishman Lewis Williams but lost a unanimous decision, as did middleweight Caitlin Parker, who made no headway against Canada’s world champion Tammara Thibeault and didn’t win a round.

Get all the latest news from the Birmingham Commonwealth Games here. We’ll be live blogging the action from 4pm-10am daily.