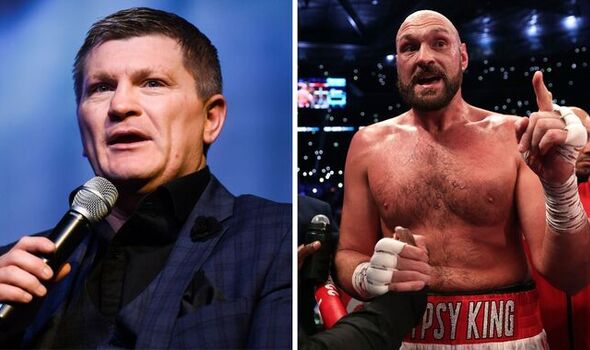 Former world champion Ricky Hatton believes Tyson Fury will unretire to face either Anthony Joshua or Oleksandr Usyk. Hatton has stated that he ‘doesn’t believe a word that comes out of Fury’s mouth’ and is sure an undisputed heavyweight clash with the winner of Joshua and Usyk will be too much for him to resist.

The Gypsy King announced his retirement after knocking out Dillian Whyte at Wembley Stadium in April but ‘The Hitman’ does not buy Fury’s announcement.

“I love Tyson,” Hatton told talkSPORT. “But I don’t believe a word that comes out of his mouth half the time, and I say that with love. He doesn’t need to fight; he’s done it all and more. What he came back from with mental health and the problems that he had like I had, for him to come back and do what he’s done, he has nothing more to prove.

“I think it’s been stalling the fight with Usyk, the fight with AJ, it’s happening then it’s not happening, and I think Tyson’s just had enough. If the TV and the promoters and the people who make the ultimate final decision, if they can pull their fingers out, I have no doubt that Tyson will come back.

Joshua attempting to overcome ‘mental problem’ ahead of Usyk rematch

“Because I know Tyson, he’s a champion and he wants to be the very best and he has proved he’s the best, but he’s got these two boils on his backside, one is Uysk and one is AJ and I don’t think he’ll want to fully put his feet up unless he’s dealt with them. I think with his retirement, take it with a pinch of salt. I think certainly if the AJ fight comes about, he’ll come back. I think the Usyk fight maybe.

“So, watch this space and he’s still running up and down in Morecambe and keeping in shape, which for his mental health is massive and it’s nice to see as his friend, but I’m just wondering if he’s got one eye on Anthony Joshua.”

Hatton is not alone in thinking Fury will fight again. Fury’s US promoter Bob Arum told Fight Hype that he will unretire as soon as they come to him ‘with the next big event’.

He said: “Tyson Fury is retired, and he will be retired until we come to him with the next big event and then he will unretire. Well, I think Fury is going to wait to see how the [Anthony] Joshua fight comes out with [Oleksandr] Usyk, and then he’ll make a determination whether he wants to continue. Other than fighting the winner of Joshua vs Usyk, there’s really nothing that’s really of interest to Tyson Fury, so we will have to see.”