Tim Tszyu’s handlers are already plotting a course for the star of Australian boxing to become the unified world champion, beginning with a title fight against Argentinian star Brian Castano on home soil.

Tszyu showed he is ready to take on the world’s best with a ruthless first-round stoppage against Bowyn Morgan at Bankwest Stadium. The 26-year-old knocked down his New Zealand opponent twice in the opening round, the second coming from a vicious right hand that ended proceedings. 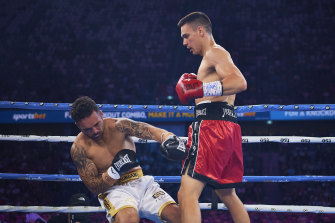 Indeed they do. Tszyu’s manager Glen Jennings helped pilot his famous father, Kostya, to the apex of the sport. Jennings now has similar ambitions for the new face of Australian boxing.

“Based on his performance, as of [Thursday morning] for breakfast [promoter] Matt Rose and I will sit down,” Jennings said.

“We’ve already got the parameters of what we need to do for this world title fight. It’s just a matter of the pieces falling into place early January.

“Whether it be end of March or early April, we want to do it here in Australia.

“There’s a lot of interest worldwide in what we’re doing in Australia. This young fella has broken a record; he’s the only fighter in the world who has had two major stadium fights.

“The world is watching.

“The world knows that Tim Tszyu is ready for the world stage. We’ll be negotiating and starting to get ready for that as of [Thursday].”

A win against Castano, and the WBO super-welterweight world title that comes with it, could be just the beginning. Jennings is already eyeing off a potential showdown with Jermell Charlo, the unified light-middleweight world champion who holds the WBC, WBA, IBF and Ring magazine titles.

“The exciting thing about his division is that if he wins this next title, one fight after that and it could be unification,” Jennings said.

“These guys carry all the belts, Charlo has got the lot. The long vision for us is if he can knock over Castano or Texeira, we will be knocking on a certain door.

“He’s not a kid who sits around and waits.

“For me, I have absolutely no problem with going after the big prize now. He’s ready, he’s done his apprenticeship, he’s arrived.”

For now, Tszyu can reflect on an incredible performance against Morgan that has justified all the hard work.

“I worked on a lot of power in this camp and you can see my physical shape, I’m getting bigger and stronger,” Tszyu said. “It paid off.

“I wanted that one, stinging shot that puts opponents into a dazzle. That’s what happened.”