Tim Tszyu will get only one crack at Takeshi Inoue.

If the Japanese fighter pulls off a massive upset in their fight on Wednesday, which would scupper Tszyu’s shot at Brian Castano’s world title, the Australian won’t get a chance for revenge.

It has been custom for Tszyu’s handlers to insist on a rematch clause, even when the 27-year-old is a raging favourite. However, Tszyu won’t have that safety net when he faces Inoue at Qudos Bank Arena.

“A loss in this fight, a rematch won’t avenge what he loses,” said George Rose of No Limit, Tszyu’s promoter.

“It’s not just a loss to Takeshi, it’s a loss of being the mandatory challenger, a loss of No.1 ranking. That’s the bigger loss. That would be a massive change to the position he’s in.

“Right now, all the cards are in Tim’s favour in the super-welterweight division and he’s the mandatory challenger for a world title. 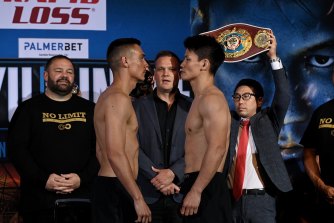 Tim Tszyu and Takeshi Inoue face off after the weigh-in.Credit:Kate Geraghty

“A loss to Takeshi Inoue is a loss of all of that; all of that hard work he’s put in to get into this position. That would change everything and he would have to start all over again.”

The risks of taking on Inoue appear to outweigh the rewards. However, Tszyu believes that to be the best he has to beat all-comers, and has welcomed the challenge.

The pair faced off on Tuesday for the last time before their anticipated bout. Tszyu has previously spoken about the challenges of making the weight as his physique grows, but had no issues coming in under the limit at the official weigh-in at The Star. Tszyu tipped the scales at 69.52kg, while Inoue weighed in at 69.68kg. 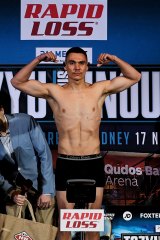 Tim Tszyu made the weight limit without incident.Credit:Kate Geraghty

“It’s a good feeling once you’re on the scales and recharged,” Tszyu said. “It’s a battle within yourself. It’s you versus you, every day.”

While both men will be significantly heavier by the time they step into the ring, this is one of the few times Tszyu won’t have a considerable size advantage over his opponent.

“Now I’ll just be recovering, getting my energy back in, eating some good food, relaxing,” Inoue said. “I feel confident I can make this a really good fight.”

Asked about his chances of becoming the first man to defeat Tszyu, Inoue said: “Yes, I do still feel I will knock him out.”

The bookies have a different view. They have installed the WBO’s seventh-ranked fighter as an $8 outsider. Tszyu again predicted he will win within six rounds.

“One thing I know is that I’m coming for his head, his body, everything,” he said.

Should he prevail against Inoue, Tszyu hopes to take on Castano for the WBO world title. His father, multiple world champion Kostya, told the Sun-Herald he wanted his first title defence to be held in Russia.

“This is going to happen,” Kostya said on the weekend. “We have talked about this for a long time. It’s going to be something special that the family will never forget. It will be a dream come true.

“It’s going to get big attention here and [in Australia]. He has to beat Castano and then he can come over here.

“It’s time to open up [borders after the pandemic]. We could do it in spring time here. It would be a very big thing to do this.”