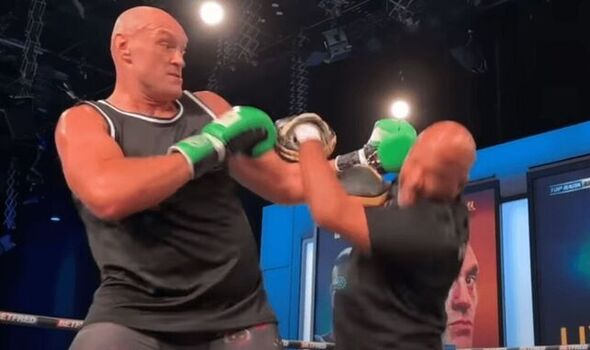 Tyson Fury caught his trainer SugarHill Steward with a sneaky check hook during their pad work routine at yesterday’s open workout for the Derek Chisora trilogy. As Steward approached, bobbing and weaving, Fury took a step to the left and delivered a short lead hook that landed flush.

Thankfully, Fury took the power out of the shot but still let out a loud “oh s***” after the punch connected. Fury and Chisora were on top form throughout the media event, as they played up to the press.

While Fury was being interviewed by Queensbury Promotions, Chisora gate-crashed the broadcast. As the pair playfully tussled for dominance, Fury offered his old foe a pact to stand in the centre of the ring and “batter the f*** out of each other.”

Chisora was all too happy to oblige and made the deal official with a spit-covered handshake. “Let’s give the fans what they want. Let’s stand in the middle of the ring and batter the f*** out of each other!” said Fury, as the pair shook hands.

“I will do this one for you,” replied Chisora. “When we get on the first round, me and you will stand there like this, we’ll let our trainers go and we’ll go.

“What I’ll do, I’ll come to the middle of the ring and I’ll wipe the floor like this with the glove, like this, and I’ll go ‘step to the line mother f*****’!’ and I’ll step to the line and we’ll have it,” declared Fury.

Joshua and Whyte’s conversation in full after awkward punch

The fight itself has been met with a largely negative response. Few have given Chisora even the slimmest of chances after Fury comfortably won their previous two encounters in 2011 and 2014. Last time out, Fury ended up stopping Chisora at the end of the tenth round and a similar result is expected when they square off again for a third time.

“We will be giving 100 per cent and may the best man win. In the ring there are no friends. We can be friends out here and shake hands, go for a burger afterwards, but in here there’s no friends.”