Roglic quickly got back on his bike but he and the other top contenders couldn’t keep up with the breakaway group at the end of the mostly flat 189km (117-mile) 10th stage that challenged riders with a summit near the end and a quick descent toward the finish line. 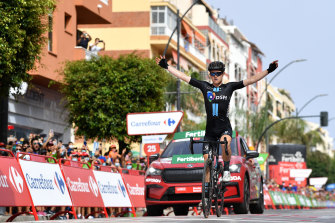 Michael Storer is just the second Australian to win two stages in a single Vuelta campaign.Credit:Getty

Australian rider Storer, competing for team DSM, finished 22 seconds ahead of Mauri Vansevenant of team Deceuninck-Quick Step. Eiking was fifth and gained a 58-second lead over Guillaume Martin in the overall standings.

Storer, who had also dominated in the climb to win the seventh stage, became only the second Australian to win two stages in a Vuelta edition, after Michael Matthews in 2013.

“It’s truly even more unbelievable than the last time. It was a massive fight for the breakaway,” Storer said. “I was feeling good on the last climb. I knew exactly what I needed to do to win today. I had to attack … I had to go fast down that descent. There are dry and slippery roads in this region. I felt my descent was just enough to hold on. I don’t realise yet that I have won two hard stages at this Vuelta after 10 days. It’s actually unbelievable.”

Eiking became the second Norwegian to lead the Vuelta, 15 years after Thor Hushovd.

“I couldn’t expect that this morning. I was nine minutes behind and it would almost take a miracle to be in the jersey,” Eiking said. “I tried to get as many minutes as possible in the end. I can’t describe what this means, it’s really really big.”

Roglic, the two-time defending champion who crossed the line nearly 12 minutes later, fell to third overall, more than two minutes off the lead. He kept a 28-second gap over Enric Mas, his closest contender for the title. Roglic had made a strong attack to the front but fell back again after going down by himself on a right-handed turn as his bike’s tire lost grip. He wasn’t seriously injured despite crossing the line with part of his shorts torn up.

Riders were coming off their first rest day in the three-week Grand Tour race. They will face a winding route and a steep climb in the 133.6km 11th stage on Wednesday.