Everyone who has crossed paths with Michael Matthews in Wollongong can sense his motivation.

The Australian knows what is at stake as he chases the rainbow jersey to close out the UCI road world championships in Wollongong on Sunday. He’s always been a motivated human being and a motivated cyclist, but there is more to it this time. Rarely do these riders get to race in Australia, and Matthews wants to make the most of it.

He picked up a gold medal in 2010 as a junior, when the world championships were held in Geelong. Now in the elite race, he is regarded as one of the most prolific cyclists on the world tour. With the green and gold bands on his shoulders, wearing the national colours of Australia, he will be more motivated than ever.

Australia has a really super team of solid riders led by a veteran Heinrich Haussler. He’s been around for a long time and he knows exactly what is required in calling the shots for his squad. There’s Simon Clarke, who has won a stage of this year’s Tour de France. He comes into the squad brimming with experience.

As for the other members, they will certainly supply the firepower to help Michael Matthews get that rainbow jersey and a gold medal.

It’s the Mount Pleasant climb that will determine who wins and loses. The men have to climb that ascent 12 times, and as we’ve seen in the junior races held on Friday, it will certainly blow the peloton apart. It is a brutal climb. It’s only 1.1 kilometres in distance, but it’s enough to shatter the race. After 12 climbs, whether it’s Michael Matthews or anyone else up the front, they will deserve that rainbow jersey.

Among the contenders is Tadej Pogacar. He has twice won the Tour de France, and he celebrates his 24th birthday during this carnival. It doesn’t matter if this is a three-week event or a one-day event, I think he is good enough, strong enough and smart enough to win a one-day event like the world championship. I think he is hungry to win that rainbow jersey, which is just as prestigious as the yellow jersey of the Tour de France, the pink jersey of the Giro d’Italia, or the red jersey of La Vuelta. 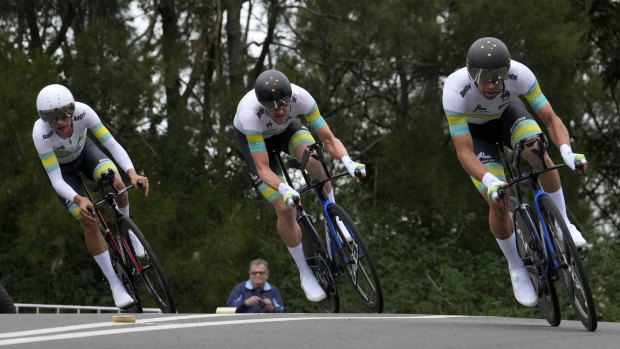 Michael Matthews (right) will chase a rainbow jersey while riding for Australia.Credit:AP

He will be right in the mix, and so too will Belgian Wout van Aert and Julian Alaphilippe, despite the Frenchman having a season dominated by crashes and misfortune. Alaphilippe has come from one side of the globe to Wollongong and he is not here to make up the numbers. He is here to try to win a world title for the third year in a row. Over the past couple of years he has had a real taste of that rainbow jersey, he wears it all year round, and he wants to continue wearing it for the next 12 months. He’ll be super motivated. I think it’s a course that suits him because he has a swashbuckling style, one that upsets his rivals.

Saturday’s elite women’s road race is interesting. The favourite, for mine, Annemiek van Vleuten, is in doubt after a horrible crash in the women’s individual time trial earlier this week. She is, by far, the most outstanding female rider on the world circuit right now. She would have been my favourite to win. Is the injury bad enough for her not to start? We’ll have to wait and see.

However the cards fall, Wollongong has put on a show that has put the city on the map. The city has shown it is a location capable of putting together a huge international event like the world championships. I hope Wollongong, because of its variety of terrain, puts on more bike races in the future. There is no reason why Wollongong can’t hold the Australian national championships, which normally take place in January and have been held in Ballarat since 2002. Some people are saying it’s time to move the national titles.

As a result of Wollongong putting on such a tremendous show over the past eight days, they have every right to make a bid for the national titles and allow Australia’s best to chase the green and gold jersey here.