The UCI road world championships fall at the end of the cycling season and predicting a gold medallist can be on par with selecting winning Powerball numbers: good luck to you.

Riders are physically and mentally fatigued after nine months of competition and will be even more so having travelled from afar to Australia, which this year hosts the event for only the second time. 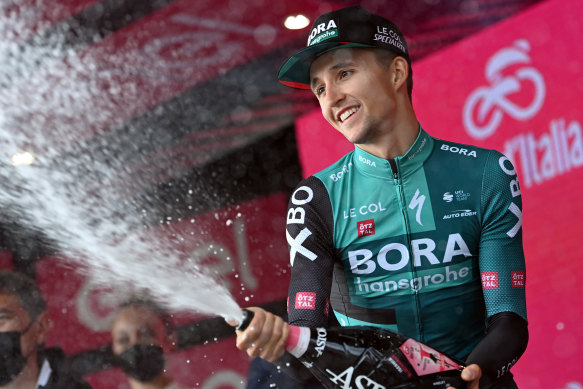 The 2022 titles begin in Wollongong on Sunday and will double as a homecoming for Jai Hindley, the born bike racer who became the first Australian to win the three-week Giro d’Italia in May, memorably telling media who questioned his intent six days out from victory: “[I’m] not here to put socks on centipedes”.

AusCycling in a statement issued on Friday said Hindley tested positive for COVID-19 on September 12 but was “largely asymptomatic” and would be monitored in the lead-up to elite men’s road race on September 25.

“At this stage we’re hoping Jai will be able to leave Europe on Monday to join the rest of the team in Wollongong mid-week,” national team chief medical officer Dr Kevyn Hernandez said.

Hindley is not the only member of the Australia’s elite men’s road race team to test positive to COVID-19 in the lead-up to the September 18-25 titles. Heinrich Haussler suffered from it and earlier this month considered withdrawing from the championships, but scrapped a series of one-day races in Canada to recoup and is expected to start.

Cycling continues to observe strict COVID-19 protocols and the threat of testing positive and being ejected from races has contributed to the rigours of the season. Motivation, or lack thereof, at this point of the year even without that can be a defining factor in performance at the world titles.

However, Hindley, speaking before his diagnosis, was determined to finish his emphatic 2022 campaign on a high alongside spearhead Michael Matthews, race debutant Ben O’Connor and a strong support cast.

“It will also be the first time I’ve been back to Australia in almost three years. I’m pretty bloody excited to be honest,” he said.

Selection for the Australian squad was contentious with two undisclosed riders lodging appeals before AusCycling announced the men’s and women’s line-up.

“I’m super keen to be in that team,” Hindley said. “It for sure would not have been an easy selection for the selectors to make, probably every Aussie pro wanted to do it.”

The 26-year-old had his hand up all season to compete in the 266.9-kilometre elite men’s road race on September 25, which, depending on how it is contested, could suit pure climbers like himself, or punchy, versatile sprinters like Matthews, who will be going up against generational talent including two-time Tour de France champion Tadej Pogacar (Slovenia), Belgian Wout van Aert and Julian Alaphilippe, the Frenchman who is gunning for his third consecutive rainbow jersey.

“It’s probably a bit too punchy for riders like me,” said Hindley, “but at the same time the team we’re taking, it’s there to race an aggressive race.

“If I can, I don’t know, be in one of the three final moves then I’ll look for that for sure, but Michael Matthews is the main man for the team and when you look at his track record in one-day racing he’s an excellent rider. He’s been on the podium at worlds a couple of times already, or if not a few times, so he’ll be there in really great form, and it’s a course that really suits his characteristics. If I can be there to help him out in any way that would also be really nice.”

It would have been understandable if Hindley rested on his laurels after his performance at the Giro. He went on a holiday in Italy with his girlfriend in the immediate aftermath and had a week-and-half off the bike but was back into it after that with end-of-season goals in mind.

“Mentally I was really motivated to get back into training again but then after a week being back on the bike, then I was a bit like, ‘Oh’,” Hindley laughed. “Once I got going it was all right.”

Hindley, if he clears COVID-19 protocols, will enter the world championships on the back of the Vuelta a Espana, which he finished 10th. He tested positive for COVID-19 the day after the three-week race, made more arduous with long transfers this year, finished. It was a notable result but not one he was happy with, having started with ambitions to feature on the podium.

Several marquee riders who were due to compete in Wollongong, including Britain’s Tom Pidcock and 2019 world champion Mads Pedersen, recently opted out, citing exhaustion as well as distance.

“Normally, the worlds is my last race of the season, so I’m all in,” Hindley said.

“Quite a lot of the big favourites probably did the Tour and that was, I didn’t do it, but it looked like one of the hardest Tours I’ve ever seen, so I can imagine some lads are pretty fatigued after that.

“A lot of guys were also meant to do Tour-Vuelta and in the end almost all the big hitters didn’t end up doing the Vuelta. That goes to show how hard the Tour was, and I think guys are still feeling the effects from that.

“In general, it’s still going to be an awesome event and a really tough race, and I’m really keen and motivated for it.”

Matthews, 31, competed in what was the fastest Tour on record this year and won a stage with what was described as the most impressive ride of his career. O’Connor, 26, also started but was forced to abandon due to injury after which he too caught COVID-19 but then rebounded to place eighth at the Vuelta.

“Normally, I’m good for one part of the year and I struggle to get back there, but this is the closest I’ve gotten to having a double or triple peak of form,” said O’Connor, who has also pledged to support Matthews.

“It has come with age and chiselling of the body; it moulds into that form where it knows what it has to do now. You’re a bit more mentally prepared. It’s easy when you’re younger to get to a certain point and then just crack.

“Everyone has their limits. You also need to manage it with your race plan.”

Stan Sport is the only place to watch every race from the 2022 UCI Road World Championships in Wollongong from September 18 – 25.