Sarran: Sunweb's Marc Hirschi cruised to a solo breakaway win in stage 12 of the Tour de France on Thursday, compensating in part for twice falling short of victory earlier in the Tour.

Having finished second in the second stage in Nice and third in the ninth stage in Laruns after a long solo breakaway in the Pyrenees, the former under-23 world champion held off a group of chasers to prevail at the end of the 218-kilometre stage. 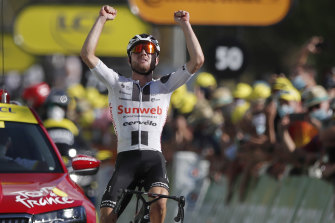 The Swiss rider powered away on the Suc au May climb – a new addition to the 117-year-old Tour. He extended his lead by racing with hair-raising speed down the other side and held off pursuers over the last 25 kilometres to claim the stage victory by a comfortable margin. The win marked his inaugural victory at his inaugural Tour.

"It's unbelievable, I was twice really close and actually today I never believed that I could make it," said Hirschi.

"I went full gas. It's super nice. Actually I was always doubting, I had the picture in my mind of the last two stages. My first victory as a professional, it's incredible. I know I'm strong. It just gave me extra power, it was now or never."

It was a quiet day for the main contenders, but sparks could fly on Friday when the 13th stage takes the peloton to Puy Mary, at the top of the ascent to the Pas de Peyrol.

Thursday's stage, the longest in this year's edition, was no walk in the park, however, as the bunch whizzed through Saint Leonard de Noblat, the hometown of former France great Raymond Poulidor, who died last November.

After a very fast start, six riders, including four-times Tour stage winner Luis Leon Sanchez (Astana), formed the early breakaway but the peloton kept them on a tight leash.

It was over for them when Marc Soler attacked on the Cote du Pey. The Movistar rider was joined by five riders, including Hirschi and two of his Sunweb teammates.

Soler jumped away in the brutal climb of the Suc au May, but Hirschi counter attacked and crested the summit alone. He extended his lead in the descent and never looked back.

In need of some good news?

Stories that will brighten your outlook, delivered weekly to your inbox. Sign up now for our Greater Good newsletter that is launching soon. Sign up to The Age here; Sydney Morning Herald here; Brisbane Times here and WAtoday here.