Hemel Hempstead: The first direct hit of golf’s grotesque civil war landed about half-an-hour after the first player teed off.

At a former industrial landfill site on the outskirts of St Albans, about 40km north-west of London, the richest golf tournament in history, with a $US35 million ($50m) prize purse, was barely living up to its frenzied and breathless hype.

Crowds were thin, the sky was grey and atmosphere flat. Imitation Grenadier Guards, a fly-over and a brass band tried and failed to bring a sense of occasion. The dull thud of on-course disco could be heard in the distance.

Then came the real drama, sent by email. The PGA Tour, the world’s premier series for men’s professional golf, had banned some of the sport’s most famous names.

Six-time major winner Phil Mickelson, former world No. 1 players in Dustin Johnson, Martin Kaymer and Lee Westwood and major champions in Sergio Garcia, Graeme McDowell, Louis Oosthuizen and Charl Schwartzel were all told they’re no longer welcome. However, it later emerged a handful, including Garcia, had resigned a fortnight earlier.

The LIV Golf Invitational Series, bankrolled by Saudi Arabia’s Public Investment Fund, had officially arrived. And golf’s biggest mercenaries, some of whom had taken US$150 million to play, became the game’s newest martyrs. 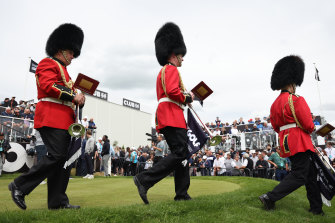 A brass band dressed as Grenadier Guards on the first tee at St Albans.Credit:Getty

“These players have made their choice for their own financial-based reasons… they can’t demand the same PGA Tour membership benefits, considerations, opportunities,” PGA commissioner Jay Monahan wrote in an open letter to players, adding they had “decided to turn their backs” on the golf world.

“I am certain our fans and partners — who are surely tired of all this talk of money, money and more money — will continue to be entertained and compelled by the world-class competition you display each and every week, where there are true consequences for every shot you take.”

“It’s troubling that the tour, an organisation dedicated to creating opportunities for golfers to play the game, is the entity blocking golfers from playing,” a statement said. “The era of free agency is beginning.” 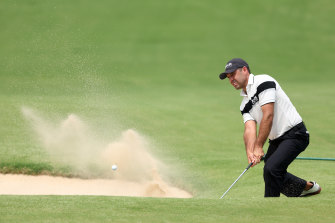 Charl Schwartzel leads after the first round of the inaugural LIV Golf Invitational London.Credit:Getty

The field was mixed, with former world No.1s like Johnson and Westwood alongside players ranked outside the top 1000.

At the end of day one the leader was South Africa’s Schwartzel at five-under, one shot clear of countryman Hennie du Plessis. Zimbabwe’s Scott Vincent and Phachara Khongwatmai of Thailand were a further shot back. 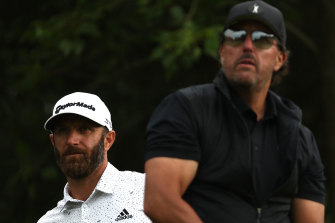 But it is the ethics of the series which are grabbing the headlines. The tournament organisers and its players stand accused of “supporting murderers and enabling Saudi Arabia’s sportwashing” – an attempt by the government to distract from the country’s human rights abuses.

Among them is the 2018 murder of journalist Jamal Khashoggi, which the CIA has concluded was approved by Saudi crown prince Mohammed bin Salman. Saudi Arabia also has been accused of war crimes by carrying out airstrikes in the Yemen civil war, arresting and torturing its political enemies, and criminalising LGBTQ individuals.

Norman, who last month said of the Khashoggi murder “we’ve all made mistakes”, has been low-profile in this week’s build-up, speaking only briefly to the tournament’s owned and operated broadcast on the opening day.

“It’s very surreal,” he said. “I feel so happy for the players and that we’ve brought free agency to the world of golf … I am proud for the game of golf, we’re growing the game of golf.”

Norman first began plotting such a series more than 30 years ago, but that circuit never got off the ground.

And organisers remain overly sensitive, amid tight security and fears of protests. Fans were warned that anyone who “verbally abuses, taunts, or shouts insults at the players, caddies, captains, volunteers, officials” would be met immediate removal.

Even booing or cheering at “inappropriate times” could lead to criminal trespass or prosecution.

Players too, having been forced to front the media as part of their contracts, were nervous about a grilling from the awaiting press. A detail list of suggested responses to questions regarding why they had committed to the Saudi-backed rebel series, accusations of performing a “money grab” and also any concerns around the PGA Tour bans – which have since been issued, was revealed by Golfweek ahead of the first round.

They included such lines as “there were a number of factors as making my decision, and money was certainly one of them”, and “we are professional athletes… we deserve to be compensated for our skills and entertaining fans”.

Another was: “I don’t know how banning players is good for the game of golf.”

On the most eventful day of golf the events off the course proved much more interesting than those on it. Fans were treated to a rock concert afterwards. Saturday’s headliner? Jessie “it’s not about the money, money, money” J, best known for the 2011 hit Price Tag.

A new era of golf has begun. How good it is for the game remains to be seen. 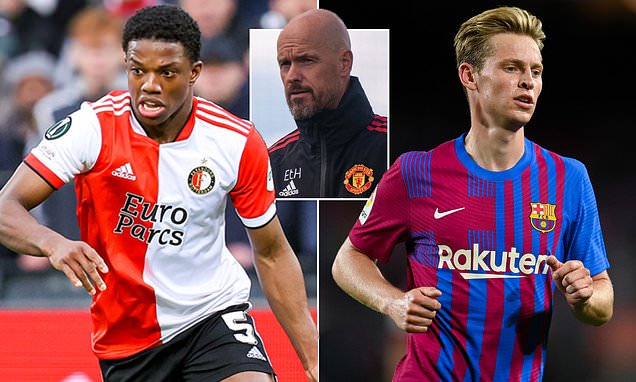