Wentworth, UK: Billy Horschel became only the second American after the great Arnold Palmer to win the BMW PGA Championship when he completed a blemish-free 65 on the West Course with his seventh and final birdie.

On a benign day littered with low scores, Adam Scott had been well in contention and started in the third-last pairing but his hopes quickly faded as he dropped shots at the first and sixth, failed to get his game going, and ended up six shots behind Horschel on 13-under par. 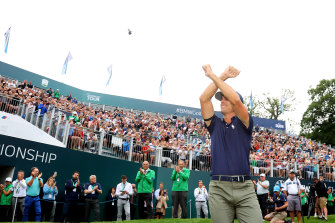 The unsung Englishman Laurie Canter could have forced a two-man shootout with a birdie of his own at the last hole but he pulled his drive between two bunkers on the left of the fairway, had to lay up short of the water and left his downhill 20-footer at the side of the hole. That handed the title to Horschel, who before his Monday flight home was planning a celebratory meal with two of his friends from EPL team West Ham, bizarrely adopted by the American after he watched the film Green Street.

“Very few Americans say they want to win a certain event on the European tour but when I watched this event on TV as a kid, I said: ‘I want to win that’. It’s nice to tick that box as the champion here,” said Horschel, ranked No.18 in the world.

Thailand’s Kiradech Aphibarnrat, who led after his first-round 64 but slipped down the field on Saturday, was the first to get to the clubhouse at 18 under after another 64. It could have been better but he pulled his second shot into a hedge at the 17th. He played two provisional balls to the green, the first of them also finding the same hedge, but luckily for him it was found in play and after a drop he got down in a bogey six to slip back from 19 under.

He finished with a par at the par-five 18th, where birdies had been on offer all day, but the Thai was philosophical about his misfortune.

“One single shot can change things, my second shot at the 17th . . . 240 with a little hybrid in my hand and a solid day,” Aphibarnrat said. “You might look at [making] birdie.” 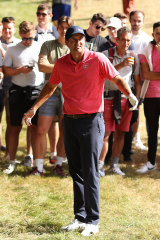 Adam Scott’s hopes petered out in the final round.Credit:Getty

Jamie Donaldson of Wales was the other man in that 18-under group after he compiled a breezy 66 in partnership with Scott, who got off to another slow start that featured two bogeys on the front nine before coming back in three-under for a 71 and a share of 14th place. The Australian played the last two holes in a combined seven-under par over the four rounds, the back nine in a total of 13 under and the front nine in even par.

Horschel is fast becoming a favourite with the British crowds but for the second time in his professional life he has now won a huge tournament immediately after missing out on a wildcard pick for the USA Ryder Cup team.

Wade Ormsby had a frontline view of the battle for Europe’s Ryder Cup places when he was out in mid-morning in front of his biggest spectator galleries of the week. Most were there to see his partner, Lee Westwood. The Englishman got off to a flyer with birdies at the first two holes before imploding around the turn and limping home in 77.

The Adelaide man was as steady as ever and got to seven under until two late bogeys dropped him into a level-par finish and tied-49th. Westwood still made the automatic nine selections for an 11th appearance in the biennial competition despite his poor performance. His main rival, Shane Lowry, made double bogey at the 15th and slipped down the money list with a 17th-place finish.

Lowry was left to hope for a captain’s wildcard pick. A couple of hours later, Padraig Harrington announced that his fellow Irishman was one of them alongside Sergio Garcia and Ian Poulter. Justin Rose, who finished sixth on the day after a fine 65, was the unlucky man to miss out.