Min Woo Lee was still on a high from one of the best days of his fledgling career as he happily hammered practice balls down the driving range the day before his first appearance in a major.

The 22-year-old younger brother of Minjee Lee, a five-time winner on the LPGA tour, won the Scottish Open on Sunday to take the first of three qualifying slots at the British Open after an astonishing round of 64. It featured six consecutive birdies on the front nine, another on the back and the final one on the first hole of a three-man play-off. And he is taking it all in his stride. 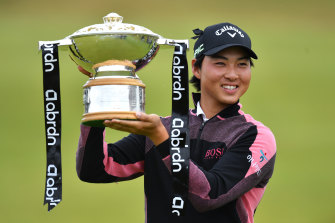 Min Woo Lee won the Scottish Open and a place in the British Open.Credit:Getty Images

Lee arrived at the Royal St George’s course on Monday afternoon, played 18 holes on Tuesday, nine on Wednesday and then pronounced himself good to go. He will accompany Christiaan Bezuidenhout and Sam Horsfield around the famous Kent links at 7.30am on Thursday (4.30pm AEST).

“I had a few drinks on Sunday, had some dinner and crashed as I was pretty mentally exhausted,” he said. “I took a nice little plane down here and got back to work. I have a lot of confidence from last week, I beat a lot of top players out there. Hopefully I can do the same this week.

“This course is awesome, you’ve got to get your lines off the tee but you don’t need to overpower it too much, just get in the right positions. There’s going to be some high numbers on some holes this week so hopefully I’ll hit it straight.”

The Lee family have been in touch from their Perth home. They’re cafe proprietors now but his mum was also a professional golfer and his dad played the game as well as being a swimming instructor. Since his arrival, the Australian golfing contingent at Sandwich in Kent have all offered their congratulations after his astonishing emergence into the game’s fast lane. 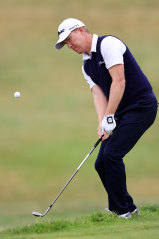 Brad Kennedy at the US Open in June.Credit:Getty

Brad Kennedy is one of them. He has been at the course since Thursday last and is aiming for a longer stay than the two days he managed in his two previous Opens. To that end, the 47-year-old is grateful to the schedulers after being handed a post-midday tee time on day one and an early start for the second round, which he feels will help immeasurably.

Kennedy arrived from the US on an elite athlete exemption visa, was whisked from the airport to his hotel in nearby Walmer and, in addition to his regular practice, played full rounds on Sunday and Tuesday, in a northerly and then a southerly prevailing wind. After Wednesday afternoon’s strenuous session on the range, he headed to the chipping practice area to apply the final touches to his preparations.

He is here by virtue of winning last year’s Order of Merit in Australia but, after missing another cut in the US Open at Torrey Pines last month, is hoping to find form when he tees off in the first round alongside two-time champion Padraig Harrington and Sam Forgan, an English teacher who came through regional qualifying.

“It’s a good tee time for me, the best I’ve had,” Kennedy said. “The last couple have been the 3.30pm and 10.30am and that’s a long first day, especially if you have a five-and-a-half-hour round. You’ve got to get in and switch yourself around pretty quickly the next morning. At least I can treat it as a normal week.

“I haven’t played with Padraig before, so it will be nice to play with him and get some insight from him, how he’s been successful at the Opens.”

Kennedy missed the cut here with rounds of 77 and 72 in 2011 for a nine-over total and is confident of improvement as he feels the playing conditions, as well as the timings, are much more amenable.

“It’s easier to play now if you hit the softer fairways. Last time, the ball was really bouncing off them and kicking into the rough a lot. They seem to be holding a bit more and I have a good idea of what I need to do to take advantage of the holes that need to be taken advantage of.

“I’m from the Gold Coast, it’s always windy and I enjoy playing that style, having to shape the ball a lot. That plays into my strength and if I can get the short game going, hopefully I can put in a good performance.”

And on the issue of a long-overdue Australian win, with Greg Norman the last British Open champion back in 1993, Kennedy, like all the others, is unequivocal. “There’s quite a few Aussies in the field this week, which is great to see, probably the biggest number [11] it’s been for a while,” he said. “And some of the guys have had wins in Europe these last few weeks too, so that’s going to help.”