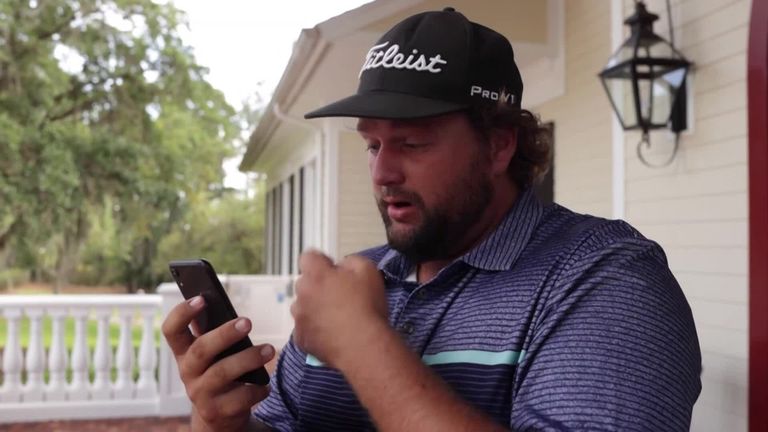 Despite the world’s top two players being in the field at Palm Habor, the build-up to the Valspar Championship was dominated by Monday qualifier Mike Visacki.

The 27-year-old American provided one of the best stories of the year when, after years of grinding away on the mini Tours, he finally realised his dream of qualifying for his PGA Tour debut in emotional scenes following Monday qualifying.

The video of Visaki breaking down as he informed his father of his achievement went viral on social media and earned him huge respect and admiration from millions of golf fans worldwide.

Many a rookie would have been overwhelmed as he stepped onto the first tee of the daunting Copperhead Course at the Innisbrook Resort. Visacki, however, defied the pressure and calmly hammered his opening drive 334 yards down the centre of the fairway.

He found a greenside bunker with his second to the par-five first, but a sublime splash-out left him a tap-in for birdie from a few inches. One under par for his PGA Tour career, and a start he described modestly as “pretty special”.

“It was awesome. I thought I was going to be a little bit more nervous than I was but I felt calm, had a good warm-up session and striped one right down the middle.”

The fairytale beginning was offset by the harsh reality of competition at the highest level as he bogeyed the next three holes, although he steadied himself with a good run of pars before beginning the back nine with another dropped shot.

Visacki drilled his tee shot to12 feet at the tricky 188-yard 13th and converted for birdie, only to give the shot straight back, but he managed to par his way home for a commendable three-over 74 – the same score as former US Open champions Justin Rose and Graeme McDowell.

“It was a lot of fun, much different than playing the mini tours,” said the humble Visacki afterwards. “It was unbelievable experience.”

A +3 finish in Round 1 for @VisackiGolfer.

The support he's felt this week @ValsparChamp has been second to none. ❤️ pic.twitter.com/WA8KNxtca3

Visacki thrived on drawing the biggest galleries he has ever seen in his professional career, and he felt good about his chances of going low on Friday and earning himself a chance to play 36 holes over the weekend.

“It meant the world,” he added. “I play a lot with the people that were following me, so to have their support this whole week has been unbelievable.

“Everyone has been so supportive of me this week and I appreciate that and I’m going to go out and shoot a low one tomorrow, make as many birdies as I can.

“This week is going to teach me a lot about what I need to work on and what can I do to get better so that I’m able to come out here and compete full-time.

“I’ve been making sure I get enough rest, because it’s going to be a long few days, so I’ve just got to make sure that I’m mentally prepared and just live my dream.”