Home » Priority for Woods must be recovery, not the next great comeback

As if Tiger Woods had not endured enough road-traffic trauma to last a lifetime, the greatest golfer of his generation was last night in surgery for multiple leg injuries after his courtesy vehicle careered off an embankment amid the rugged Pacific bluffs of southern Los Angeles.

It is one of the grim patterns of Woods’s chaotic off-course life that several of his deepest personal crises have had a connection to cars. 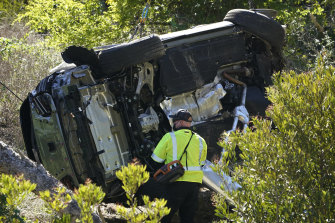 Investigators at the scene of Tiger Woods’ car crash in Los Angeles.Credit:AP

It was a sentiment expressed -vividly by Justin Thomas, the world No.3 and a player with whom Woods has grown especially close.

“I’m sick to my stomach,” he said. “I’m just worried for his kids. I’m sure they’re struggling.”

Woods is in the process of writing his autobiography, Back, the only book yet to secure the full cooperation of his inner circle, and which he hopes to deliver an antidote to more lurid outside portrayals, not least those offered by a recent two-part HBO documentary.

The title has a clear double meaning, referring both to the redemptive arc that propelled him to a fifth Masters triumph in 2019 and to his catalogue of late-career back problems. 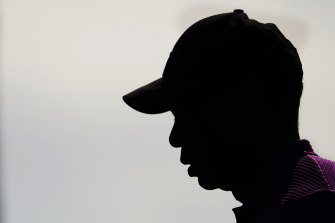 Woods was aiming to win a 16th major when he returned to Augusta, the scene of some of his greatest triumphs, in April.Credit:AP

Indeed, it was only last month that he announced he had undergone a fifth back surgery, a microdiscectomy to remove a pressurised disc fragment. It is the grisliest of misfortunes that he has found himself back in an operating theatre when he had not even recovered fully from the previous procedure.

Quite simply, Woods’s is a story that defies any scripting. No memoir or biopic can possibly do justice to the sharpness of its rises and falls, to the trajectory of a player who won a 15th major within four years of being in such agony that he could barely hit a ball.

Similarly, there is no artistic licence that can be taken with the stark realities of his personal circumstances. No sooner does some tranquility appear to be returning to Woods’s life than a news flash arrives that his car is on its side in a California ravine.

It is almost a rite of passage at this time of year that questions begin to be asked about whether Woods will be ready for the Masters. It had become a lively topic again in 2021, with his lumbar issues forcing him out of several tournaments.

But we can forget any predictions of his future at Augusta now. Indeed, there is a debate about whether it is appropriate to talk about his return to the game at all.

Woods has endured a litany of medical ordeals that would have floored a lesser competitor, and he has produced one Lazarus-like feat in the form of his fifth green jacket.

Unrealistic expectations are foisted on him every time he enters a major, even though his life already constitutes the greatest of sporting epics.

His only priority over the fraught weeks ahead is his convalescence from compound leg fractures. Beyond that, none of his chroniclers have a right to expect any more.

At his lowest ebb, Woods said that his highest ambition was to lead a pain-free life. As he lay stricken in an LA hospital, this was all that anyone could wish him.