Home » Golf » The world’s best golfer had COVID. Then he won the US Masters

The most 2020 story in world sport was written at Augusta National on Monday (AEDT); the world's best golfer contracting COVID a month before a rescheduled US Masters, and then winning the darn thing while barely raising a sweat.

No one knows the long term impacts of the coronavirus on elite athletes who recover from it, but in Dustin Johnson's small sample is any guide it can't do too much harm. 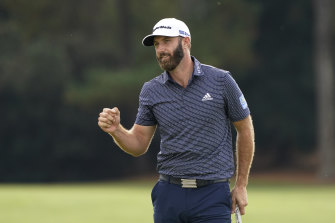 "I watched a lot of TV, but even then I ran out of stuff to watch," Johnson said a couple of weeks ago of his stint in quarantine. "It was really boring. The most movement I made was to the shower and then I had a little outside area, so I would go sit outside for a little bit. That was it."

He has been taking putting advice from Greg Norman, even if not taking his counsel on a Saturday night of Masters week.

Johnson had finished in the top 10 of the Masters in four of the last five years, including a runner-up to Tiger Woods in 2019. 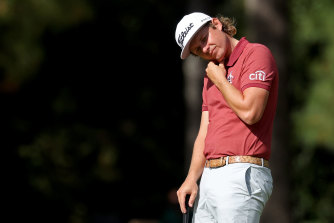 Cameron Smith finished second with a total and performance which would have won the green jacket many times in past years.Credit:Getty

The only other time he hasn't been at the pointy end of the leaderboard was when he missed the 2017 tournament after falling down the stairs of his rental house two days out from the opening round. He withdrew before he could make it to the first tee.

While the other Cameron Smith, also a Queenslander, prepared to launch his book on Monday morning, the golfer tried to write one of the most remarkable tales in Australian sport.

Like his rugby league namesake, Smith shares a love of fast cars and once wanted to play for the Broncos. His physique is unremarkable, too. He doesn't hit the ball as far as Johnson or his modern contemporaries, but his finesse and touch has had him fighting for a green jacket which would have been a size or two too big anyway.

Having started the final round four shots behind Johnson, Smith halved Johnson's buffer to two by the time they swung for the back nine. The Masters doesn't start until the turn on Sunday, but it finished shortly after.

Johnson made birdie on the 13th and 14th holes, Smith gave up a shot on the 11th and wildly hooked a desperate hail mary approach on the par-five 15th into the only group of people seemingly allowed onto the course. From the other side of the Sarazen Bridge, he somehow made birdie, but Johnson was picking up strokes too.

The softer November conditions – the Masters is traditionally played in April – made for lower scoring.

Smith (69) left with Augusta records, and still couldn't reel in Johnson. The Australian became the first player in Masters history to shoot four rounds in the 60s and carded the lowest overall score to have never won the tournament. He finished in a tie for second with Presidents Cup teammate Sungjae-Im (69).

Up ahead of Johnson and Smith, Woods' title defence was up Rae's Creek. He was already long out of contention, but Amen Corner doesn't even spare the greats.

Woods found the water three times on the par-three 12th, from the tee, from the subsequent drop and then from the back bunker having eventually made it across the water. He finished with a septuple-bogey 10, his worst ever score on a single hole on the PGA Tour.

In the next six holes, Woods (-1) made birdie on five of them. He walked up the fairway on the 18th hole, more than a year after one of golf's most historic moments, in complete silence. He promptly sunk his birdie putt, clapped by a handful of volunteers and officials and walked, with that wooden gait of his, burdened by lower back problems, into the Augusta evening to get Johnson's jacket ready.

The one he had plenty of time to think about in isolation.