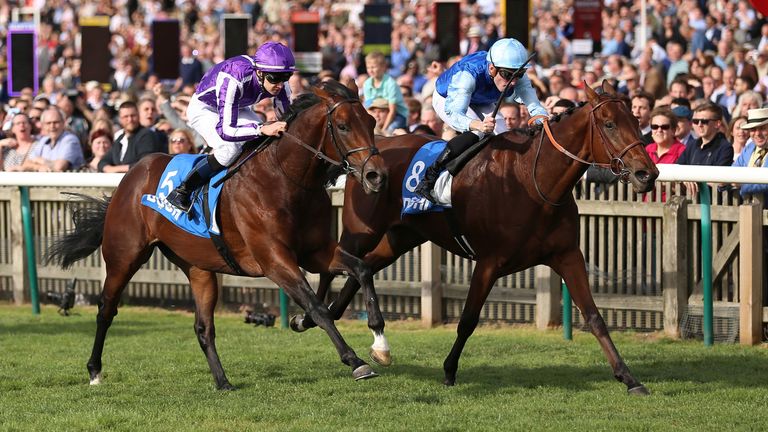 Magna Grecia will bid to provide Aidan O’Brien with a ninth victory in the Vertem Futurity Trophy at Doncaster on Saturday.

It is 21 years since the Ballydoyle handler first claimed the final Group One of the British Flat season with Saratoga Springs (1997) and he has since added to his tally with the likes of High Chaparral (2001), St Nicholas Abbey (2009), Camelot (2011) and last year’s hero Saxon Warrior.

Magna Grecia created a big impression when making a successful racecourse debut at Naas last month before being narrowly denied by Andre Fabre’s French challenger Persian King in the Autumn Stakes at Newmarket just a fortnight ago.

The Invincible Spirit colt was supplemented for this weekend’s Town Moor feature on Monday and looks set to be a hot favourite in the hands of the trainer’s son, Donnacha.

O’Brien senior said: “Magna Grecia is in good form. Obviously it’s not long since he ran in Newmarket, but he seems to be in good form since.

O’Brien also saddles Circus Maximus and Western Australia, who were third and fourth respectively in the Autumn Stakes.

He added: “Circus Maximus is in good form. He seems to have come out of Newmarket well and we were delighted with his run as well.

“We’re looking forward to seeing him running again too. He was still a little bit green last time. He was very green in Gowran the time before that and was still green there. We think he will progress more.

“Western Australia is a solid horse. He ran a good race at Newmarket and he seems to be in good form since.”

John Gosden has surprisingly never won this particular prize and this year fires a twin assault.

The Clarehaven maestro’s chief hope appears to be Turgenev, who has registered successive wins at Newcastle and Newmarket since filling the runner-up spot on his Doncaster debut.

“He’s a progressive horse. He is only a novice winner and he doesn’t come with any Group race form, but he is a nice horse,” said Gosden.

“He has pleased us since winning at Newmarket and deserves to take his chance in a race of this nature.”

With Oisin Murphy in Australia to partner Benbatl in the Cox Plate, Kieran O’Neill takes the ride on Turgenev’s Qatar Racing-owned stablemate Kick On, who dominated his rivals over the Rowley Mile a month ago.

Gosden added: “He won well at Newmarket and I’m happy to let him run.

“He had a setback after his first run so he had a nice holiday. He has grown a lot and is a genuine galloping horse.

“The mile helped last time as he has got a huge stride and covers a lot of ground.”

The Charlie Hills-trained Phoenix Of Spain is the only Group-race winner in the field having landed the Acomb Stakes at York in August.

“He probably sets the standard on form. He goes there rated 111, which is pretty high,” said Hills.

“I think the extra furlong will suit him and we know he handles the track.

“I’m pleased the rain has stayed away and we’re looking forward to running him.”

Great Scot has won three of his four starts for Tom Dascombe, most recently impressing in testing conditions at Haydock when landing the Listed Ascendant Stakes.

David Simcock and Charlie Fellowes run a couple of once-raced winners in Raakib Alhawa and King Ottokar respectively, with Andrew Balding’s Dashing Willoughby renewing rivalries with the former after being beaten a neck at Newbury.

The 11-strong field is completed by the Kuwait Currency, a dual winner for Richard Hannon and fifth behind the aforementioned Too Darn Hot in the Dewhurst a fortnight ago.