Co-trainer Michael Kent jnr is confident I’m Thunderstruck is ready to prove he is a worthy Cox Plate aspirant by chalking up his first group 1 weight-for-age win in the $1 million Makybe Diva Stakes (1600 metres) at Flemington on Saturday.

Kent believes I’m Thunderstruck is ready to peak this campaign and emerge as a legitimate Cox Plate contender, which is his main spring mission. 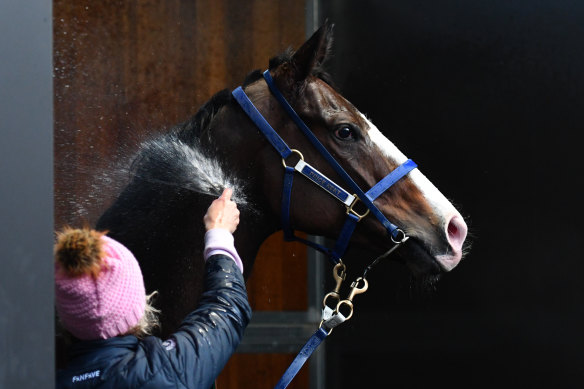 “He needs to be a better horse, but we think he is. So far, in terms of feature races, he’s won a group 1 handicap, the Toorak, and the Golden Eagle, which is restricted to four-year-olds,” Kent said.

He said I’m Thunderstruck’s first-up second to Snapdancer in the group 1 Memsie Stakes at Caulfield last month, where he settled a long way back and ran home strongly, showed he was ready to win a group 1 weight-for-age event.

“He was probably the run of the race in a race dominated by the fit and forward mare Snapdancer. If he can bring that run to Saturday, he should go very close,” Kent said.

He said it wouldn’t be an easy race as he was pitted against some top horses, headed by Western Empire and Alligator Blood.

“He’ll need to be very good to be winning, but he’s come back very well.”

Kent and his co-trainer Mick Price have also flagged a change in tactics. They said that I’m Thunderstruck would settle closer in the run in the eight-horse field.

Kent said his initial reaction to I’m Thunderstruck having drawn barrier one was it could be an awkward draw, but after a deeper analysis of the race he thought it could be an advantage.

“If we had drawn out it would be a case of, ‘where do we end up?’ but from barrier one he’ll get a nice soft run. We might end up tagging Alligator Blood, who is the likely leader, and he should take us a long way into the race,” Kent said.

“I think it should work out fine, the horse loves Flemington, the mile is a big tick. He’s a consistent horse who seems to run well every start and he’s done everything right from his first-up run to his second-up run.”

Kent Junior said that I’m Thunderstruck was ready for a busy six weeks. He will run in the Underwood Stakes (1800 metres) at Sandown Hillside on September 24, then the Might and Power Stakes (2000m) at Caulfield on October 10 and the Cox Plate (2040m) on October 24.

“It’s a bit of racing, but he’s a lightly raced five-year-old gelding who we’ve looked after. He’s only had 15 runs,” Kent said. “He’s a very tough, sound horse.”

Grahame Begg is also looking forward to having Nonconformist continue his spring campaign in the Makybe Diva Stakes, but believes he faces a tough task to win second-up from a long spell.

Nonconformist had his first run since he finished second in last year’s Caulfield Cup, when he also contested the Memsie Stakes at Caulfield, finishing eighth.

Begg was delighted with that effort and said the Makybe Diva Stakes was another stepping stone for Nonconformist in his bid to go one better in this year’s Caulfield Cup.

“If he can run into the money I’ll be delighted,” Begg said. “We will be playing sniper out the back. If they run along it might make it hard for him at this stage of his preparation and if it’s sit and sprint that also won’t be easy for him.″⁣

Begg said Nonconformist would also tackle the Underwood Stakes and the Might and Power Stakes before the Caulfield Cup on October 15.