Aidan O’Brien is set to launch a five-pronged assault on the Cazoo Oaks, headed by ante-post favourite Santa Barbara.

The daughter of Derby hero Camelot was joint-favourite for the 1000 Guineas at Newmarket on just her second career start following reports of spectacular workouts on the Ballydoyle gallops.

Santa Barbara ultimately came up a little short over the Rowley Mile, but was only beaten a length and a quarter into fourth place and her trainer has not lost any faith in his exciting filly.

He said: “Santa Barbara is very well and this was always pencilled in to be her second run this year.

“We were delighted with her run in the Guineas and everything has gone well with her since. That was a big ask for her. She passed every test we put in front of her with flying colours and probably to ask for any other result wouldn’t have been right.

“We were always going to go into the Oaks not knowing if she stays a mile and a half – I suppose we’re going to find that out. She’s by Camelot, which is a big help, and we know she’s got a lot of class.

“She’s only had the two runs, which is not a lot going into the Oaks, but we’re excited and looking forward to seeing her run.” 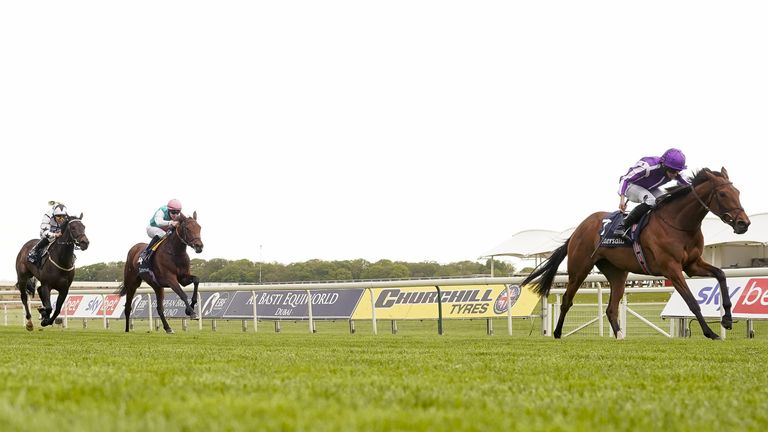 Next in the betting is stablemate Snowfall – winner of the Musidora Stakes at York.

“We were delighted with her (Snowfall) in York and she’s come out of that very well. We think maybe going up in trip on better ground and maybe having a year under her belt to get stronger has all been a help to her,” O’Brien said.

“She’s always been a very good home worker and always worked like a filly that had loads of class.”

The trainer is also preparing to saddle market springer Divinely, as well as outsiders La Joconde and Willow, adding: “We always liked Divinely a lot. She’s a sister to Found who won a Group Three last year and has had the one run in Lingfield this year.

“Ryan said he was delighted with the run. He said they went very slow and that didn’t suit her, but he was really happy with her.

“Her homework has been very nice since and all her figures from her works have been coming out very high – that’s usually a very good sign.

“La Joconde is another filly we always thought more of than she showed. We think there’s plenty to come from her – she’s a very solid filly and we think that she has loads of quality.

“Willow is out of Peeping Fawn and has progressed with every run and will progress more. She’ll love the trip and if there is any ease in the ground, that won’t bother her. Physically she’s done very well as well.

“We just think and feel that they’re all bred to be Oaks fillies and it might be very wrong to stop them from taking their chance.”