Cox Plate winner Sir Dragonet is relishing the early stages of his preparation for next autumn with the stable contemplating a first up tilt in the Group 1 Australian Cup at Flemington in March.

Co-trainer Ciaron Maher, who trains alongside David Eustace, will put his Group 1 star on a path to the $4 million Queen Elizabeth Stakes but is still weighing up his first up assignment.

A date with the Australian Cup over 2000m on March 6 in Melbourne is a suitable launching pad while Randwick’s Group 1 Chipping Norton Stakes (1600m) also holds appeal.

Sir Dragonet has been off the scene since finishing sixth in this year’s Melbourne Cup at just his second Australian start.

The Irish-bred son of Camelot had been trained by Aidan O’Brien before being purchased by Australian connections and made an instant impact on Australian shores by winning The Valley’s premier weight-for-age classic. 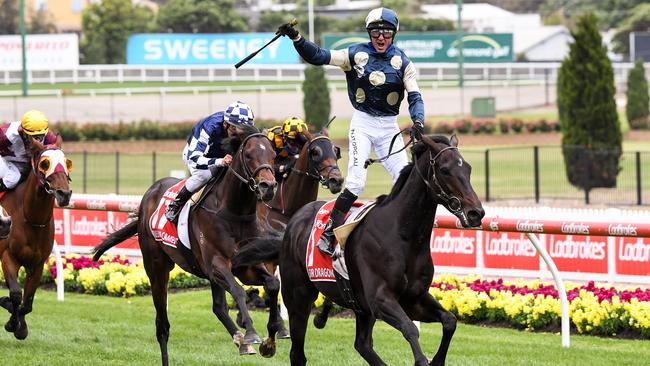 Maher is keen for Sir Dragonet to repeat the dose in Sydney’s top weight-for-age middle distance feature on day two of The Championships on April 10 at Randwick.

However, Sir Dragonet is still more than two months off a raceday return and has spent recent weeks preparing for the autumn at Maher and Eustace beachside base in Balnarring.

“He is in training on the beach introducing himself to the dolphins there at Balnarring,” Maher said.

Racing: Luke ‘Stumpy’ Williams was so overwhelmed by his Jericho Cup win on Count Zero in Warrnambool that he dropped the F-bomb post-race….

Racing: Luke ‘Stumpy’ Williams was so overwhelmed by his Jericho Cup win on Count Zero in Warrnambool that he dropped the F-bomb post-race.

“His main target is the Queen Elizabeth here but whether we kick off in the Australian Cup or not, we will see.”

Sir Dragonet is on the second line of betting for Queen Elizabeth alongside Russian Camelot at $8 with last year’s winner Addeybb and Caulfield Cup victor Verry Elleegant equal favourites at $6 with TAB.com.au.

Sir Dragonet is also an $11 second elect with the bookmaker to defend his Cox Plate crown in 2021.