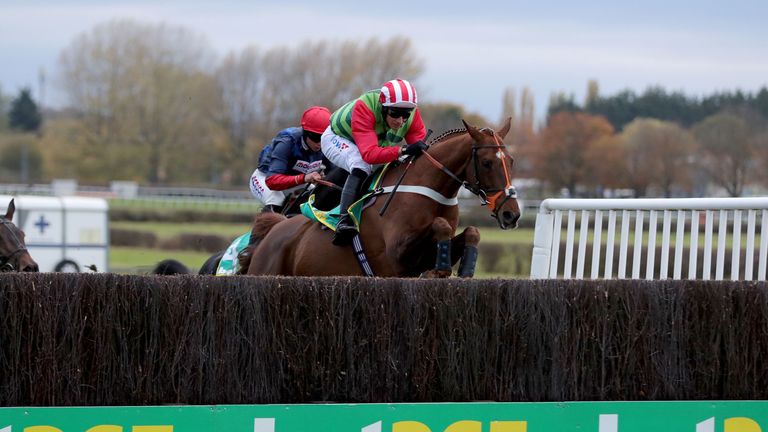 With the high-profile pair of Bristol De Mai and Thistlecrack not declared on account of the ground and Regal Encore declared a non-runner on Saturday morning, a field of just four runners went to post for the West Yorkshire track’s feature event of the season.

And that number was soon reduced by one after Double Shuffle suffered a crashing fall at the very first fence.

That was not the end of the drama though, as just two fences later Bryony Frost performed miracles to stay on board 5-4 favourite Black Corton after he ploughed through the first open ditch.

Black Corton regained his momentum to maintain the lead before the Brian Ellison-trained 3-1 shot Definitly Red, winner of last season’s Cotswold Chase at Cheltenham before finishing sixth in the Gold Cup and unseating Cook at Aintree, took over with over a circuit to run.

With Virgilio dropping away slightly, it turned into a straight shootout in the home straight and try as he might, Black Corton could never quite get on terms, with Definitly Red passing the post two lengths to the good.

Ellison is currently in America for the Breeders’ Cup meeting, but Cook said: “He likes good ground and he really enjoyed himself today.

“He’s perfect for me because he races behind the bridle a little, but he keeps finding for pressure.

“He’s done wonders for me and I love riding him.

“I think he enjoyed the slight step down in class today.”

Owner Phil Martin pointed to Aintree a likely next port of call for Definitly Red, but expressed some doubt about trying to defend his Cotswold Chase title if the team decide to take the Gold Cup route again.

He said: “I think when he won the Cotswold Chase last season that left a mark on him in the Gold Cup, so if we’re thinking that way this year he wouldn’t run in it, that’s if we’re being serious.

“The next obvious race for him is the Many Clouds Case at Aintree he won last year. It’s a small field and he likes to boss them, he’s much better in smaller fields.

“He’s a fantastic jumper and him and Danny are a match made in heaven.

“This is a race I’ve always wanted to win. Brian wasn’t keen to run, but I twisted his arm.

Frost was relieved to have maintained her partnership with Black Corton and far from disheartened by his effort.

She said: “Let me just pick my heart up off the floor. It was a silly mistake, I shouldn’t have been up there, but he stuck his neck out and made sure I didn’t fall off.

“He’s run great, he’s fresh and happy, we’re all in one piece and live to fight another day.”