The horse that came closest to beating the wonder mare Winx in her four Cox Plate triumphs, Humidor, has been denied his chance to win the great race this year.

With 18 declarations for the 14 spots available, some connections were always going to be disappointed, and despite some intense last-minute lobbying from the Ciaron Maher stable, Humidor was named as first emergency. 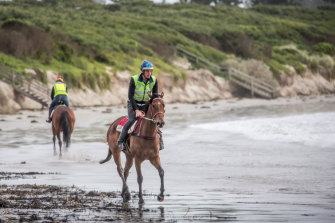 Humidor, who ran third to Winx in the Cox Plate last year, has missed out on a spot in the field this year.Credit:Christine Ansorge

"He's the weight-for-age warrior.  He's on the right trajectory, Blake Shinn [who was aboard when he got to within three quarters of a length of Winx in 2017] is back from Hong Kong, we are putting the band back together again," part owner Brae Sokolski said at the Breakfast with the Best as he tried to persuade the committee to include his galloper.

But it was to no avail. The others to miss out were less controversial: unlucky Caulfield Cup runner Mr Quickie is second emergency, with Gailo Chop third and Dream Castle, Godolphin's second runner, the fourth emergency.

The Moonee Valley committee debated long and hard about who to include and who to leave out before announcing the field just after 9am on Tuesday.

Chairman Don Casboult said: "This is the first time in many years we have had so many nominations.

"We have had 19 accept. We have a maximum field of 14, it's been a very challenging morning in selecting the field.

"Our overarching objective is to assemble the best quality field … on our judgment of the best current racing form."

That meant that the grizzled veteran Black Heart Bart, a rejuvenated nine-year-old whose connections paid the $200,000 late entry fee to run, got his place in the field.

He has shown some of the best lead-up form since his return to racing, springing a 100-1 shock in the group 1 Underwood Stakes before running a narrow second to Cape of Good Hope in the Caulfield Stakes.

Godolphin will be represented by Avilius, who bled from one nostril during exercise at the Valley last Saturday. He satisfied the stewards that he was fit and well in trackwork at Flemington on Tuesday morning. 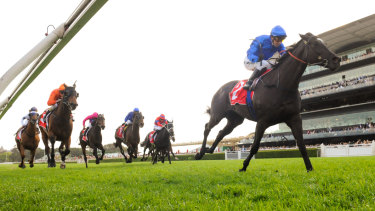 Avilius has been cleared by stewards to race in the Cox Plate.Credit:AAP

The favourite is Japanese mare Lys Gracieux, in whom confidence has grown since the victory of another Japanese galloper, Mer De Glace, in the Caulfield Cup last Saturday.

But she has drawn a wide barrier, which will give her jockey, Caulfield Cup-winning rider Damian Lane, plenty to think about. She is eligible for a $2 million bonus if she can win on Saturday.

The committee opted to include two overseas horses that have not won a group 1 race – the Kiwi-trained Te Akau Shark and the Aidan O'Brien-prepared Magic Wand – in the field at the expense of Humidor, Gailo Chop and Mr Quickie, three locals who all are group 1 winners in this country.

Black Heart Bart's jockey Brad Rawiller said: "It was a frustrating last 12 months … he was having trouble with his feet, he was still competitive against the best, but with 10 months in the paddock he has come right."

Rawiller was aboard the former WA galloper when he last ran disappointingly in the Cox Plate three years ago, behind Winx.

"The day before that last Cox Plate run he was close to being scratched. Now we have got him back to 100 per cent. I love the way he is relaxing in the run and giving himself every opportunity to run a strong 2000 metres."

Jamie Richards, the trainer of Te Akau Shark, was disappointed that the horse drew the widest alley.

"It makes things difficult. He is going to have to be at his ultimate, the best we have ever seen him. He's going the right way, it's a big step up for him. It's a pleasure to have a horse good enough to compete on the international stage."

Ben Hayes, who, along with his father David and training partner Tom Dabernig, will saddle up Harlem and Cape of Good Hope, said the draws for his charges were positive.

"Talking to Coolmore, they think Cape of Good Hope is a very similar horse to Adelaide [the 2014 Cox Plate winner]. He galloped here on Saturday morning, he got around the track nicely. Two weeks between runs, you think he would be better.

"I think Harlem is the most underrated horse ever. Avilius has never beaten him over 2000 metres when they raced, yet he is 10-1, Harlem is 50-1. He is really strutting around at home, he seems like he is in the zone."

"If he [David Hayes] could win this race it would be really exciting," said Hayes, referring to the fact that his father would be leaving Australia to train in Hong Kong after the carnival.\