Astute trainer Grahame Begg confirmed he will have his first Melbourne Cup runner when Lunar Flare took out the Bart Cummings (2500 metres) at Flemington on Saturday.

Although the winner of the Bart Cummings is guaranteed a start in the $7.75 million Melbourne Cup (3200m) on November 1, Lunar Flare already has one as she was No.21 in the order of entry. 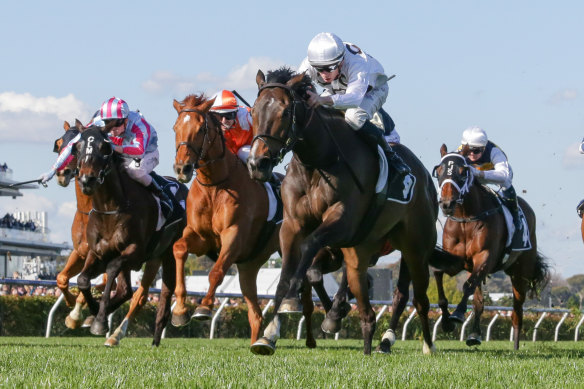 For Begg, the result was confirmation the seven-year-old mare had the talent to be a Melbourne Cup starter and fulfilled his ambition to have a runner in Australia’s most famous race.

The former NSW-based trainer made a move to Victoria in 2016 after he took a sabbatical from training and won the 2018 Blue Diamond Stakes with Written By.

Begg, the son of Hall of Fame trainer Neville Begg, trained several top horses from Sydney including Telesto and Our Egyptian Raine.

“This year we set out to have her in the Melbourne Cup if she was good enough, now she’s fully qualified so it’s terrific,” Begg said.

“This will be my first runner. It is [great] for the stable, they’ve done a wonderful job presenting her here on the day and I thank the ownership group, they’ve been very understanding and have helped us along.”

Begg pointed out that it was only Lunar Flare’s third run this time in, and she had more improvement to come.

“She’ll go to the Moonee Valley Cup in three weeks time, she likes that little bit of a space between her runs and then 12 days into the Melbourne Cup.”

It was Lunar Flare’s seventh win since he joined the Begg stable at the start of 2020.

“She’s come up really, really good this time and this is the first preparation we’ve had that we know where she’s at because in previous preparations we didn’t even know where her ceiling was until she won the Moonee Valley Cup last year,” Begg said.

Begg said Lunar Flare was tenacious in a finish and not many horses got past her in a tight finish.

The race was messy with a slow tempo and the unlucky runner was Francesco Guardi ($21) who clipped heels with 800m to go and almost fell but flew home to finish second, beaten a long neck by Lunar Flare ($6).