We start with the sprinting girls on a surface that could even reach a Good 3 with dry weather continuing and strong winds about. Home track four-year-old 1. Island Lass normally takes a run to get her prep going, but she’s been given two progressive trials up to 1000m, and draws to find the right trail. 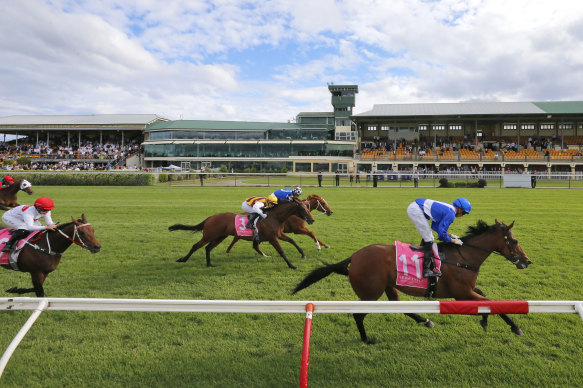 Racing is on again at Newcastle.Credit:Getty

Dangers: Tough four-year-old 2. Millingimbi has beaten all bar the winner in her last three, twice attacking the line late from midfield, but rises to a career high 61kg. Keep safe 5. Ideel Girl who draws inside second-up after a dominant win against similar opposition at double figure odds. Watch the betting on 3. Capital Gamble a month between runs and coming through the same formline as the former, and has trialled okay since; while 8. Hope Uno did her best work late last time, although coming back sharply in distance.

How to play it: Island Lass to win
Odds and Evens: Split

Keen on progressive country colt 2. Remlaps Commander by Extreme Choice who can break through at only his second start. Did well to finish only a bit over a length from a highly touted and hot favourite on debut at the provincials, and this looks a nice follow-up and thin race.

Dangers: Emerging 1. Don’tcha Think boxed on okay after leading to the turn on debut in heavy ground, and can give a big sight here with a stronger rider taking over. Watch the market on 3. Roclind Lad resuming at big odds for just his second start with blinkers coming off.

How to play it: Remlaps Commander to win and quinella 1 and 2
Odds and Evens: Split

Now the boys’ edition of that opening race, and talented four-year-old 2. Lightfast looms well over the odds second-up. Disappointed first-up at Scone, but facing less depth here. Drawn out, but closing form last prep is good enough to win this over a bit more ground, and significantly, top country jockey takes over from a rookie.

Dangers: Promising Brisbane-based three-year-old 6. Johnny Dash has won both starts this prep, each time right in the market, but wouldn’t be diving into anything too short from this awkward draw. Emerging 5. Bonjour Rupert tracked the speed before careering past to win easy at his second start, and he looks above average.

Improving 4. Boss returned with a dominant all-the-way win in the country, and again drew to roll to the front; while included in wider exotics, 3. Trumpster deep into his prep; and 1. The Fossil at big odds who can improve sharply second-up with blinkers off again.

How to play it: Lightfast each way and box exacta 2,5,6
Odds and Evens: Split

Not much separates a few of these. Provincial mare 1. Star Mission was good late, resuming in a very handy provincial maiden after dropping out the back and covering ground. Despite the weight hike, will take great benefit from that run, and was only beaten narrowly second-up last prep.

Dangers: Improving mare 2. Miss Capella closed off well enough second-up, and stays at the distance. Track the betting on debutant filly 4. Vancouver’s Gem who debuts for a strong provincial yard behind two plain trials, although may have resented the synthetic in the most recent.

How to play it: Star Mission to win
Odds and Evens: Split

The boys turn now, and it’s a very tricky and open affair, with plenty either resuming or very early in the prep. Improving metro four-year-old 8. Jumeirah Beach has gone back and trialled smartly since two solid and even runs to start his first full prep. Looks ready now on a little weight drop.

Dangers: Big watch on resuming three-year-old 11. Wild Irish Rover who resumes having bolted in the second of two Randwick trials. So You Think three-year-old gelding 9. Rise To It debuts in blinkers for a powerhouse metro stable behind two progressive trials. Metro-based and beautifully bred 6. Burns to Embrace held his ground okay on debut, but will find it tough here from a wide gate. Include in wider exotics, 2. Blue Guitar and 10. The Seeker both second-up.

How to play it: Jumeirah Beach to win
Odds and Evens: Split

Keen on lightly raced 6. Seahaven who finally returns after a six month spell. Has been given two quiet trials, but can settle back here from the wide gate under the best pilot and finish over the top fresh. Bred to get further.

Dangers: Capable country mare 9. Watch Me Rumble is the immediate threat and primed to peak third-up. Improving stablemate 5. Volterra comes off a narrow barrier-to-box second-up CL1 win in weaker company, although up in weight from a tougher draw. Tough seven-year-old 2. Hemsted has won three straight in the country, but the weight and inside draw here against better opposition could both come against; while 1. Kinship can improve sharply after four runs back having been afforded little chance and luck so far.

How to play it: Seahaven to win
Odds and Evens: Split

News, results and expert analysis from the weekend of sport sent every Monday. Sign up for our Sport newsletter