Mr Quickie will undergo a vet inspection on Friday before the Moonee Valley Gold Cup after Racing Victoria stewards reported the rising four-year-old was showing signs of being lame in his near fore.

However, connections are confident he will be declared fit to start in the 2500-metre race that will determine whether he proceeds to the Melbourne Cup. 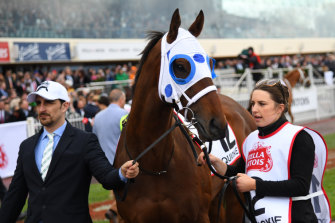 Mr Quickie will be checked before racing on Cox Plate day.Credit:AAP

Meanwhile, the Aidan O'Brien-trained Hunting Horn will have his first start in Australia as he finetunes for the Melbourne Cup.

Ballydoyle's stable foreman T.J. Comerford said the five-year-old had settled in well and he expected a big run.

"He is in good order," Comerford said.

Ventura Storm is the only runner in the race not entered in the Melbourne Cup, however several runners remain so far away from getting a start they may not continue their program in Victoria.