Home » Horse Racing » Waller: Winx could have beaten any horse – but at a cost

With Winx one run away from the breeding barn, trainer Chris Waller is finally allowing his mind to drift and dwell on a dream clash.

Not with his star colt The Autumn Sun, which looks like joining Winx in retirement as well after his Rosehill Guineas victory on Saturday, but the unbeatable Frankel – arguably the most dominant horse of the century in Europe. 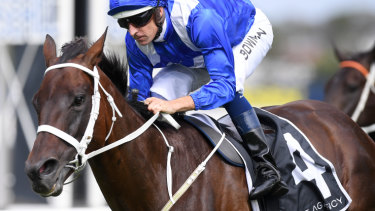 One to go: Winx continued her winning streak with a fourth win in the George Ryder Stakes at Rosehill on SaturdayCredit:AAP

Winx eased to a 32nd consecutive win on Saturday and it was again apparent there is no competition to extend her in Australia. In Waller’s eyes, it's a reason she is still racing as a seven-year-old.

“It is a big part of it that. She doesn’t over-exert herself to win and she has got longevity,” Waller said on Sydney radio.

“I said to someone [on Saturday] I would love to see her race a horse like Frankel, or whatever the greatest horse has been … I think she could beat whatever that horse may be. And I guess on their terms maybe they could beat her.

Winx will undergo the usual checks in the next week and if she has come through her fourth George Ryder Stakes win well, she will say farewell to racing in the Queen Elizabeth Stakes at Randwick on April 13.

It should be a sell-out to follow the crowd of over 24,000 fans that roared her to victory at Rosehill on Saturday.

Master trainer Waller has been able to keep Winx at her peak for several years and another effortless victory only confirmed what has become apparent this preparation.

“It would be arrogant to say that [it was effortless] but she is doing it pretty easy. I’m not going to say she has never been better, but she is not showing any signs of slowing down,” Waller said. “It’s not far away from retirement now. She is going to be retiring in the best possible form.”

It was like a track gallop for Winx, who got out to the centre of Rosehill, where she does her work in the mornings, before  Hugh Bowman got her mind on the job at the 300m mark. 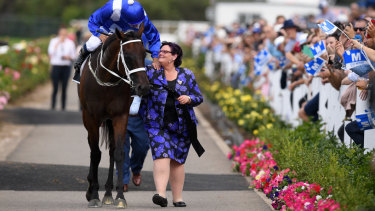 “She was so wide out on the track – she does all her trackwork there. We very rarely ask her to do anything and I think she might have thought she was doing trackwork,” Waller said. “It is hard to explain actually how good she is because she only does what you want her to do.

“The best way of explaining it is that you see it in trials. She doesn’t win trials but come gameday she will do whatever she has to win and beat the next quickest horse. That is what she did [on Saturday]. She just ambled up and that’s just a sign of her class.”

Meanwhile, Waller will sit down with the owner of triple Guineas winner The Autumn Sun to plead his case for  another year from the star colt before he goes to stud.

“I’m qualified now to take on some of these better horses and I can assure you the best is yet to come,” Waller said.

The son of Redoute’s Choice won his fifth group 1 in the Rosehill Guineas to join Boban as the second most successful horse from the Waller yard at the highest level.

Managing owner, Arrowfield boss John Messara, said a decision on whether he has another start in the autumn would be made Monday, while it might take a week or so before a decision is made on if he will go to stud.