The 2020 MLB season may still be in a holding pattern as the world continues to deal with the coronavirus (COVID-19) pandemic, but the suspension of play hasn’t eliminated off-the-field drama.

Former Astros player Evan Gattis brought old feelings about Houston’s infamous cheating scandal back to the surface when he tweeted out a photo of a glass featuring Athletics pitcher Mike Fiers and the phrase “snitches get stitches.”

The glasses were sold by a Houston-area bar and restaurant called The Flying Saucer. The establishment’s Twitter account said the glasses sold out quickly and Gattis was the last customer to purchase one.

Despite proudly displaying the glass on social media, Gattis explained he has “zero bad feelings” about Fiers and thought the novelty item was “funny.” He understood there would still be a great deal of “anger” aimed at members of those Astros teams.

Fiers, who played for the Astros from 2015-17, told The Athletic in November that Houston electronically stole signs in 2017. The Astros beat the Dodgers in seven games to win the 2017 World Series, only placing a bigger spotlight on the scandal.

Since emerging as the primary whistleblower, Fiers has received praise and criticism for his decision to publicly address how the Astros gained an illegal advantage. He revealed last month he has even received death threats, but he made it clear he can handle whatever comes his way.

“Whatever, I don’t care,” Fiers told The San Francisco Chronicle. “I’ve dealt with a lot of death threats before. It’s just another thing on my plate.” 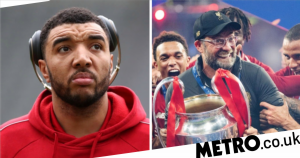