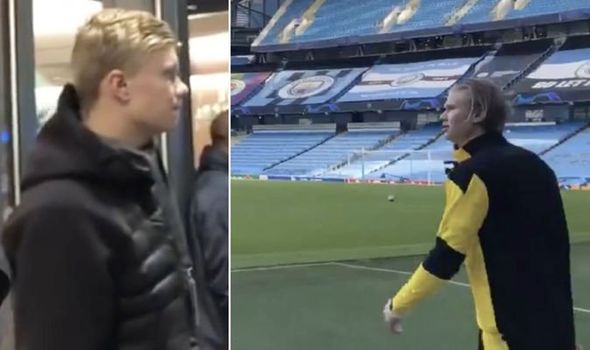 Erling Haaland probably knew what he was doing. Filmed by Borussia Dortmund coming out of the Etihad tunnel and on to the pitch – and he could hardly have missed the camera man to his left – he said to team-mate Jude Bellingham: ‘Beautiful, huh?’

You wouldn’t be surprised if it was a deliberate ploy from the player and his team as they drum up interest across the continent to determine his best destination after Dortmund. After all, his representatives have already begun their European sales tour.

Mino Raiola and Alf-Inge Haaland flew out to Barcelona and Madrid last week to talk to Spain’s two biggest clubs and are expected to sit down with Manchester City, Manchester United and Chelsea next.

It is the Premier League trio who are seen as having the strongest chance of landing the Norwegian, who Dortmund have slapped a hefty £127million (€150m) minimum price tag on.

All five clubs have different things to pitch to Haaland and his team to try and convince him to sign, and no doubt the huge agent’s fees involved could cause an issue for some teams. It could cost nearly £300m to sign the player on a five-year contract if his apparent £600,000-a-week wage demands are genuine.

City have never previously paid over £64m for a single player, preferring to buy a host of £40m-50m players, but Pep Guardiola has indicated that could soon change – though they will not pay anywhere near that salary given their well-managed wage structure. 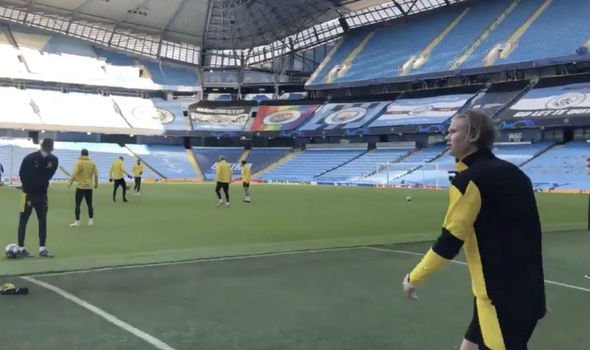 But with Sergio Aguero they have never had to spend eye-watering sums on a new centre-forward. Now they will have to, with the Argentine off once his contract expires at the end of the season, and Haaland is the best in class. His 49 goals in 50 Dortmund appearances, at the age of 20, are testament to that.

And while United and Chelsea are the two teams with the most column inches dedicated to their pursuits of Haaland, the striker himself may already have indicated that City have an edge over their ‘Big Six’ rivals.

The Premier League champions elect of course go head-to-head with Haaland’s Dortmund in the Champions League quarter-finals where Guardiola will get a close-up glimpse of the Norway international’s devastating abilities.

Yet it is not the first time that Haaland has been to City’s home stadium. He was present as the Citizens defeated Feyenoord in the Champions League back in November 2017, the same night Phil Foden made his senior debut.

Back then Haaland played for Molde, under now United manager Ole Gunnar Solskjaer, and was present for the group stage clash alongside his dad Alf-Inge, who spent three years as a player himself at City. 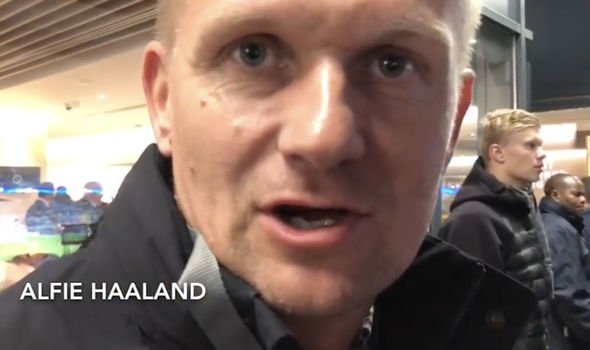 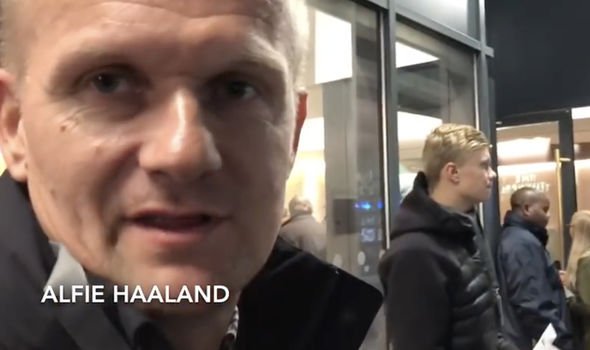 Iconic City broadcaster Ian Cheeseman caught up with Alf-Inge, also known as ‘Alfie’, in the stands on his YouTube channel and Erling can be seen nonchalantly stood in the background scrolling his phone, no-one recognising who the-then teenager was.

And although Erling simply being present at the Etihad back then does not mean on its own he will choose City over any other club, that combined with his comments about the same ground on Monday indicate there is a soft spot there for the club.

He’s bound to know all about City from his father, the ex-Norway midfielder and defender who joined from Leeds for £2.5million in 2000 and racked up 38 Premier League appearances before injuries took effect. It is unclear if Alf-Inge would prefer him to land at City than at United or another club such as Real Madrid.

But there’s an abundance of reasons why he himself might want to play for Guardiola’s side, who can still win an unprecedented quadruple this season as they seek a first European Cup triumph.

Their imminent title success will be their third in the past four seasons under Guardiola while they have also won three League Cups and an FA Cup. They can add an extra one to each of those still this term. 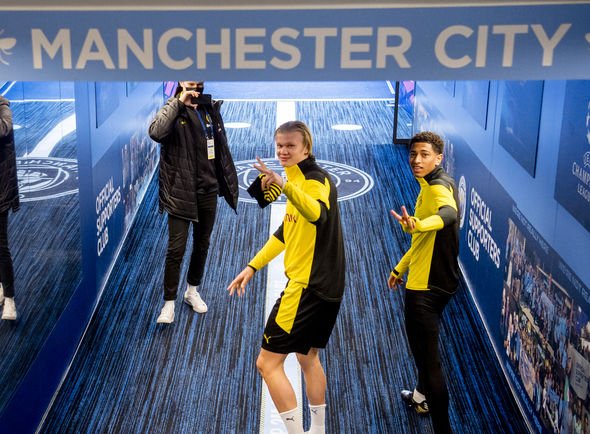 City play an excellent style of football and he’d be guaranteed chances and would have a very high chance of winning a slew of major honours wearing sky blue.

Guardiola heaped praise on the towering frontman in his pre-match press conference and indicated, after previously appearing to rule out a big-money move, that City would be open to paying the big bucks.

“So far the club has decided not to spend close to £100million for a player,” the Catalan said.

“Maybe in the future, it will happen when the club decides it is necessary to improve the team for the next five to ten years but so far the organisation decides not to do it and that’s why we didn’t do it but maybe in the future.

“All I can say is he is an exceptional striker for his age. The numbers speak for themselves. He’s a fantastic player, that’s all.

“In that age scoring that amount of goals is not easy to find. The numbers speak for themselves. When that happens it is because he can score right, left, counter, box, header.

“He’s a fantastic striker. Everybody knows it. A blind guy can realise he is a good striker. It is not necessary to be a manager [to see that].”

And if City truly do go all-out for the player, as the likes of United and Chelsea are expected to, they’ll hope that the Haaland family’s connections to the club – and Erling’s fondness for the Etihad – can sway him towards becoming their long-term Aguero replacement.