But he was the first player to realize China’s potential at a time when the country’s middle class began rapid growth with expendable income.

Bryant’s first visit was in 1998, and in selling sports apparel, conducting basketball clinics, doing business and participating in philanthropy, he became revered, almost god-like, in the basketball-loving country.

“It’s harder for me to walk around here than in the states,” Bryant told reporters in China in 2013. “In the states, you get a lot of recognition. They say, ‘Hi.’ They want autographs and pictures. But here, it’s uncontrollable. They rush you and surround you to the point where you can’t go out.”

Once, nearly 15,000 people showed up at 9 a.m. for an event Bryant wasn't scheduled to appear at until 4 p.m. Another time, a few thousand people wanted to see Bryant so badly they were angry and upset when Bryant arrived 90 minutes late for an event due to safety concerns.

There is a statue of Bryant in a Lakers uniform outside of Guangzhou Academy of Fine Arts Sculpture Museum.

He was and perhaps remains China’s favorite NBA player, and fans in the country were devastated by his death in a helicopter crash Jan. 26 in Calabasas, California.

They posted millions of tributes on Chinese social media, and Tencent, the NBA’s digital partner in China, posted a memorial page that drew more than five million visitors in less than five days.

NBA China aired a 50-minute Bryant special, changed its plays of the day to all Bryant highlights and showed a condensed version of his 81-point game. CCTV, the state-run network, still is not showing NBA gamesas a result of the fallout from the Daryl Morey pro-Hong Tweet in October. But CCTV did publish tributes to Bryant on social media.

Andrew Collins is the CEO of Mailman, a sports digital marketing and technology firm in China, and in his newsletter following Bryant’s death, he wrote, “Kobe was a unique athlete to work with. Unlike many stars of his caliber he was personally (involved) across all projects. He took meticulous care in making decisions for his brand, who he partnered with and made decisive decisions when needed.

“When in China he made time to meet charitable causes, adoring fans, potential business associates and existing partner(s). It was always a packed schedule and he didn't miss a beat."

Bryant grew up in Italy where his dad, Joe, played pro basketball. Bryant said his exposure to European countries gave him an appreciation of different cultures. 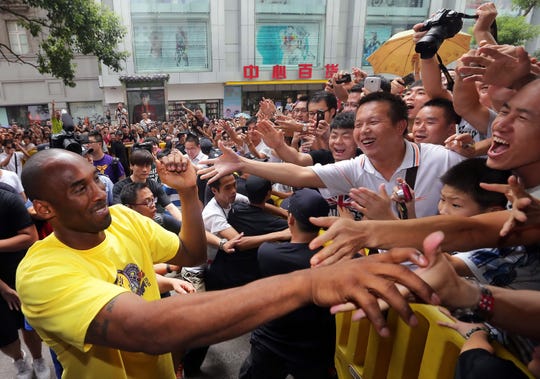 Kobe Bryant shakes hands with Chinese fans during an event in Wuhan in central China's Hubei province, in 2012. (Photo: AP)

“You grow up with the understanding of adapting to different cultures and being curious about different cultures – the history, philosophy, the foods,” Bryant said. “So when I first came out to China, it wasn’t something where I was apprehensive to learn or try new things. I was excited to because that’s how I’ve always grown up. So I think me having that openness and curiosity about their culture, I think it endeared me to them in some respects.”

One trip, Bryant visited the famous Terracotta Army, which features thousands of sculptures of the armies of Qin Shi Huang, who was the first emperor of China. Bryant once dunked on a portable basket at the Great Wall of China.

USA Basketball chairman Jerry Colangelo saw first-hand Bryant's popularity during Bryant's time with Team USA at the 2008 Beijing Olympics, when as captain he led the team to a gold medal.

“When you pull up in a bus at 2 a.m. in some city in China and there are tens of thousands of people on the streets, yelling not “USA!” but, ”Kobe! Kobe!,” it was unbelievable, just unbelievable,” Colangelo said.

Bryant continued to visit China after he retired from the NBA in 2016 and was involved with several Chinese companies, including Alibaba, which was co-founded by Brooklyn Nets owner Joe Tsai. He partnered with the massive commerce company to distribute the documentary "Kobe Bryant’s Muse." Bryant also reached a deal in the summer to become the brand ambassador for the Asian division of Fun88, an online casino and sports book.

Bryant understood the importance of selling sports gear, especially basketball shoes, in China. How valuable is the sports apparel market there? Nike’s revenue in China surpassed $6 billion from June 1, 2018 to May 31, 2019, according to statista.com.

Bryant visited China in August for the 2019 FIBA World Cup and told reporters, "I watched it develop from the ground up. I watched the city (Beijing) grow, watched the passion for the game develop.

"Going forward for this market, the (goal is) to develop their basketball to a level where they can compete with the best basketball countries in the world. That should be the goal. I know that is absolutely the goal for Yao (Ming)," Bryant said.

Yao's presence in the NBA combined with Bryant's popularity helped the NBA's growth in China. Last season, 640 million Chinese watched NBA content, including 21 million who watched Game 6 of the 2019 Finals.

And just two days before he died he posted on the Chinese micro-blogging site Weibo, wishing Chinese fans a happy new year.

“Happy new year, my dear friends in China,” Bryant said in the short video. “Thank you for your support this year where you’ve shown passion and dedication through your hard work. In recognition of this, I’d like to give away my latest Granity Studios books – Wizenard series ‘Training Camp,’ ‘Legacy and the Queen', and ‘EPOCA: The Tree of Ecrof.’

“I wish you happiness, health and inner magic to achieve more success in the upcoming year of the mouse. Love, Kobe.”