Kevin Durant scored 29 points as the Brooklyn Nets survived an injury to James Harden and pulled away late for a 115-107 victory over the Milwaukee Bucks in Game 1 of the Eastern Conference semifinals on Saturday in New York.

Game 2 takes place on Monday night in Brooklyn, and it could be played without Harden, who injured his right hamstring in the opening minute of the first quarter and did not return.

Kyrie Irving added 25 points and eight assists as the Nets shot 46.9 per cent and had enough scoring to compensate for Harden’s absence.

Giannis Antetokounmpo led all scorers with 34 points. He shot 16 of 24 from the field and helped Milwaukee score 72 points in the paint, but the Bucks were just 6-for-30 from three-point range and lost for the first time in the playoffs after storming past Miami in a first-round sweep.

Former Net Brook Lopez added 19 points and Jrue Holiday contributed 17. Khris Middleton was held to 13 points on 6 of 23 from the floor and 0 of 5 from three-point range.

Without Harden, the Nets still gradually took control, taking the lead for good a little over three minutes into the second quarter before building a 14-point lead through three quarters.

Durant shot 12 of 25, and two of his biggest baskets occurred after Antetokounmpo’s 18-footer and three-pointer made it 103-93 with 7:01 remaining. He converted a seven-footer in the lane, and following a missed layup by Middleton, Durant threw down a dunk off a no-look feed from Irving to make it 107-93 with 6:24 left.

Brooklyn clinched the win when Irving hit Harris with a bounce pass from underneath the rim for a corner three-pointer that made it 115-96 with 3:41 remaining.

Irving’s layup around Middleton gave the Nets their second double-digit lead at 83-73 with 4:21 remaining in the third, and Brooklyn ended the quarter with a 12-4 run to take a 98-84 edge into the fourth.

The NBA’s two highest-scoring teams played at a dizzying pace – look down after a basket and they might already be shooting at the other end by the time you looked up.

The pace favoured the Nets, who pulled away for good in the third quarter.

It’s a shame that a series that had talent all over the rosters started on a down note when Harden had to come out of the game after just 43 seconds, walking to the back after the Nets called timeout before they had even scored. He had appeared to grab at the back of his right leg after a drive toward the basket on Brooklyn’s first possession before.

“When you prepare for a game and he’s such a big part of the game plan that can throw you off. But I was proud of the guys that they didn’t get rattled, they hung in there and got the win,” Nets coach Steve Nash said, adding that he had no update on Harden’s status. 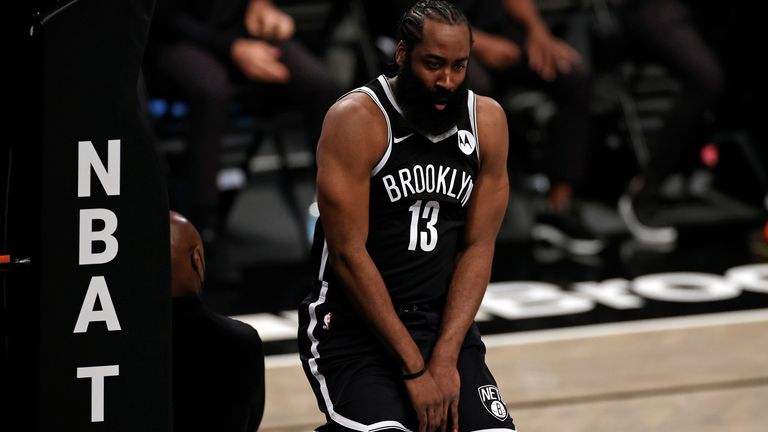 Harden predicted a day earlier this series would be a showdown.